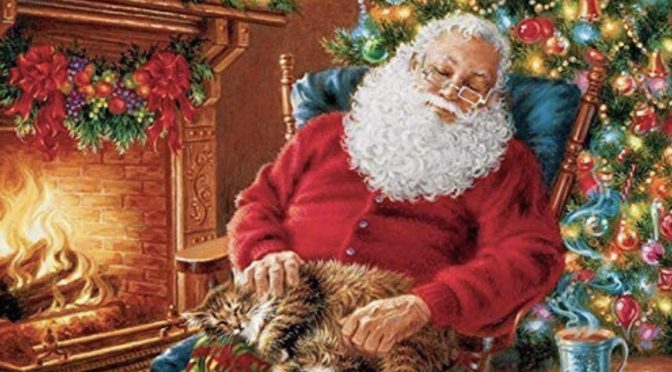 Santa Claus was passed out cold on her fireplace, and Olivia was beginning to regret coming downstairs for a snack. She was in shock, and also a little frightened. Was Santa Claus really in her house? She stopped believing in Santa years ago, but after this, realized that she had been wrong all this time. Unsure of what to do, Olivia tapped on his shoulder. At first, it did no good. Santa was out cold, perhaps tired from all the trips he had been making around the globe. It was three in the morning, and he surely had more places to go. Olivia, still unsure of what to do, started pacing the room. She ventured over to the kitchen, and spotted that the cookies and milk left for him by her little sister hadn’t been touched. Still hungry, she decided to take one of the cookies for herself to enjoy. As she reached for a cookie, she heard a voice, “Ah, taking my snack I see.”

Olivia quickly turned around, and saw Santa Claus. He wasn’t very tall, had a white beard, and looked almost identical to how you see him portrayed. “Uhm, well, I was a little hungry myself,” Olivia said, startled. Santa laughed, “Oh it’s alright. As a matter of fact, I’m starting to get a little full. Billions of cookies will do that to you.” They began to have a conversation, and Olivia asked a question that Santa loved, “You deliver all of these people presents, but you get nothing in return, what would you want for Christmas?”

Santa smiled, “Seeing the joy on each and every one of the kids’ faces is enough for me.” After a few minutes of talking, Santa told her he had to go, and for her to keep this interaction their secret. He snapped his fingers, and up the chimney, he vanished.

Several hours later, Olivia and her family gathered in the living room, ready to open presents. Olivia’s little sister, Madison, noticed a present that she hadn’t seen before. No label on it, nothing. Her parents, also a little confused, told her to open it. There was a note inside, with a riddle on it. The riddle insinuated that it will lead the person reading it to the greatest gift of all. The family then started their journey to find this present. The riddle read, “If a lion had a Christmas music album, what would it be called?” They immediately wondered what they could possibly do which would lead them to the gift. The family all agreed that the riddle seemed very hard to figure out, and how they could possibly use it to find this gift. Then, Olivia remembered, during her conversation with Santa hours prior, in response to him asking what they’d be doing to celebrate Christmas, she noted that she and her family were potentially going to go to the zoo, as it was something her little sister had been begging her parents to do. Unfortunately, her parents tried to buy tickets to go and see the lights, and a fireworks display, but it was sold out. After the conversation she had with Santa resparked in her mind, she said, “The zoo!” Her parents thought it made sense as well, since it said something about a lion in the riddle.

Looking around their home, they looked for more clues; that’s when Madison discovered something stamped on the “Jingle Bells” record they had, which they always listened to on their record player this time of year. Jingle was crossed out, and it instead said, “Jungle Bells!” Madison lifted up the record to discover four tickets to the zoo. Filled with excitement, Olivia, along with the rest of her family, knew one thing was for sure: Santa Claus is real.