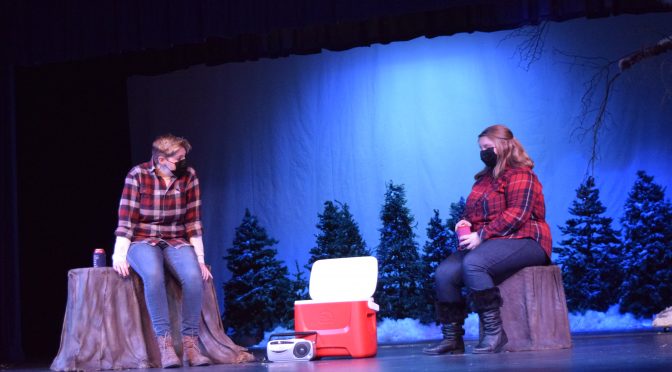 The play Almost, Maine was performed by the GC drama club cast on January 28, 29, 30, and the 31.  But with Covid-19 interfering with normal events, how did the Drama club pull it off?

The director of the play, Mrs. Carolyn Voigt, picked a play that included eight scenes and prologue/interlogue/epilogue, and each scene involved different cast members.  This meant that every scene could stay socially distant from everyone but their scene partner(s).  With different members in each scene, everyone got a good role that also kept all the actors safe.

Second, the sound crew cleaned every mic, mic pack, and any other equipment before and after every use, said Paige Rutledge, 10.  They have always put mics on the cheeks and through hair, so doing the hair-positioned mics more often-due to the masks-was not a problem.

Overall, the members have done a great job of staying socially distanced.  When the director had to quarantine at home due to Covid-19 symptoms, the assistant director, Brynn Elliot, 11, took charge and kept the cast together.  She took on the extra leadership and was able to keep the practices going.

As for the actors, they did their part to stay socially distanced.  When the director was out, no one from the cast had to quarantine because they had been staying 6 ft. away from Mrs. Voigt.  With tactics like these, actors and crew members stayed safe, stayed smart, and made a great show.

Elliot said, “I know Mrs. Voigt has wanted to do Almost, Maine for a long time. This was just a great opportunity to do it.  The social distancing aspect of the show was one of the reasons we chose it, especially for contact tracing purposes.”  This is a great example of how the cast has worked to take a positive outlook on everything.

Towards the few weeks before show week, people were very cautious.  They couldn’t risk getting quarantined and missing their scenes.  Because of this, they worked to socially distance in their seats while watching the run-throughs during practice.

Of course, come show time, the small choir room and green room made it almost impossible to socially distance but by then everyone was either going to have it or not so people weren’t as worried.  It also helped build an even closer bond that might have been built sooner if not for Covid-19 and the six-feet rule.

Kaya Billman, 12, the president of Drama club, mentioned how good the play had turned out even under the circumstances, and what was even more impressive was the bond the club had made even through the differences and hardships, she said.