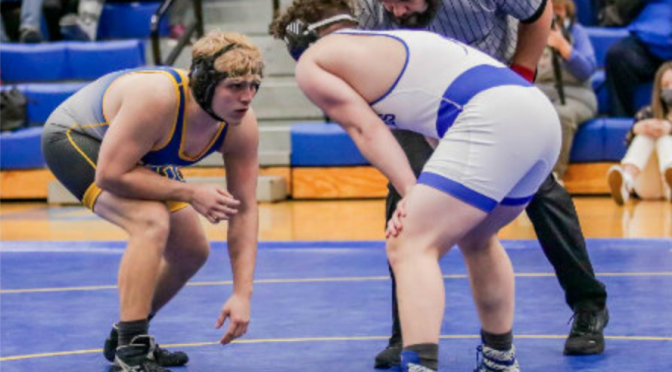 Photo Caption: Scott Stanley, 12, goes up against a Franklin Central opponent on Dec. 2.

It’s been a year filled with many great moments for the Greenfield-Central wrestling team, and after securing the program’s first Hoosier Heritage Conference title since 2012, the excitement inside the program is through the roof as sectionals draw closer, and with this season taking place during a pandemic, the conference championship feels even more rewarding for this Cougars unit.

In a season unlike any other, COVID-19 has certainly played a big role in how things have been conducted, and its presence has caused many different individuals to be quarantined, forcing the Cougars to always have the next-man-up mentality. In response to what this season has been like in the middle of a pandemic, Logan Condrey, 12, said, “COVID has affected our season heavily. I myself have been quarantined, and we have lost some big time wrestlers right before sectionals, like Dakota Herald.” Although this Cougars team has faced many challenges from this pandemic throughout the course of the year, they have found ways to overcome.

As for the conference tournament, it was just another example of this team finding a way to overcome. A complete team effort from the Cougars was what powered the group to the conference title win. Five wrestlers from the Greenfield-Central squad advanced to the championship finals in their respective weight classes, with four of them reigning victorious. These individual championship wins earned by Matt Torres, 12, Scott Stanley, 12, Dakota Herald, 11, and Chase Gardner, 11, each tacked on at least 24 points to the Cougars’ total, along with every single weight class contributing to the team’s 238 total points.

At the conference tournament, Torres went from unseeded at the start of the tournament to champion of the 145-pound division in the end. Seeing the hard work he put in throughout four years as a Cougar all come together to capture the individual title was something that he’ll never forget. “Winning a conference title was a crazy rush of emotions. It felt great seeing my teammates, coaches, family members, and friends be so proud of me. I can’t thank everyone enough that helped me train and prepare for that moment. Bandits for life.”

The hard work Torres has put in is no secret to those involved with the program. His teammate, Logan Condrey, 12, said, “Seeing one of my best friends, Matt Torres, win an HHC title was probably the most improvement I’ve seen from anybody this entire season. He’s worked hard his whole life, but never got his payday until now. It was awesome to see.”

Torres isn’t the only one who will never forget this conference championship. Head Coach Josh Holden has been at Greenfield-Central for 17 years, coached 13 teams to winning records, earned HHC coach of the year honors multiple times, and yet, this is just his second Cougars team to conquer a conference title. That alone shows you just how tough it is to do. “I can’t tell you how proud I am of this team. They are only the second team to do it in my 17 years. And, to do it during the COVID epidemic just shows their resilience. We focused all year on that tournament, then, they went out and took it,” Holden said.

Capturing the conference title itself wasn’t the only thing that made the win special for Holden, though. “The other thing that made it special for me was the fact that we lost a former wrestler this year. Dezmen McGinley was on the last team to win the HHC title. He was a special kid. His heart was as big as anyone I have ever known. He made you smile when he walked into the room. It was like he was watching over us at the conference. I can’t explain it, but we were different that day. It was special, like Dezmen.”

Holden has seen this Cougars team improve throughout the course of this season greatly on the mat, but the area in which he feels he has seen the most improvement is the team that they have become. “We preach every year that we will be the most improved team in the conference by the conference tournament. This year it was obvious that we were as evidenced by us winning the HHC title. We definitely improved on the mat, but the thing I think we improved on the most was being a team. People think of wrestling as just an individual sport, but you need teammates to get you through the tough times wrestling throws at you. You can really see this team coming together and loving each other.”

After capturing the HHC title, the Cougars had to put the championship behind them and fully focus on sectionals. Focused is exactly what they were, as the team’s efforts resulted in nine regional qualifiers, with six third-place finishers, and three fourth-place finishers. Unfortunately, all of the improvements that were made, and all of the hard work that this Cougars team put in throughout the course of the year was put to a halt. On February 3rd, the school officially announced that the Cougars wrestling team would be withdrawing from the IHSAA state tournament before regionals due to COVID-19 protocols. Six of the nine regionals qualifiers on the Greenfield-Central squad will be back next year, and along with the entire team, are going to use this as motivation, and after having major success in a season that included an HHC title, the entire unit is hungrier than ever before going into next season.