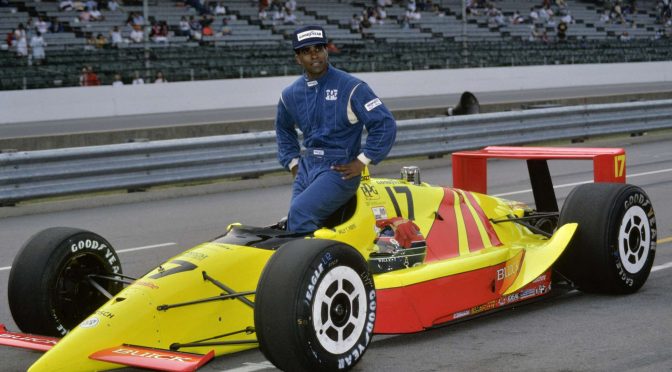 Photo Caption: Willy T. Ribbs was the first African American to qualify for the Indy 500. He achieved this honor in 1991.

February is Black History Month, a time to celebrate the amazing past and present African Americans in history. With Indiana being such a big racing state it’s no surprise that Willy T. Ribbs is a prominent African American in our history. William Theodore Ribbs was born on Jan 3rd, 1955 to Geraldine and William T. Ribbs, Sr. in San Jose, California. It was early in his life when he discovered his love of cars and racing. He was said to race his car around the California mountains when he was a teenager.

After he graduated high school in 1975, Ribbs traveled to Europe to compete in races and join a racing school. During his time at the racing school we won six of the eleven races the school held. He made his way back to America in 1978 where he competed in a Formula Atlantic race at Long Beach. During May of that same year race promoter Humpy Wheeler promoted Ribbs to compete in a NASCAR Winston Cup; he decided to promote Ribbs in an attempt to attract African Americans to his racetrack for more business. Though at first he was denied for a lack of experience he was eventually allowed to race, but his opportunity was shot down because of an alleged run-in with law enforcement.

He had his first qualifying race for the Indianapolis 500 in 1986 where he had a notoriously lackluster test race, only getting up to 170 mph while other rookies got to 200 mph. He ended up dropping out of the race early which disqualified him from appearing in the actual race. In 1989 he caught the eyes of Bill and Camille Cosby, who funded a motorsports team with Ribbs as its star racer. With this team he won two top-ten events in 1990, and he also qualified for indy 500 for the first time in 1991. He qualified again for the Indy 500 in 1992 and 1993 but didn’t in 1994 because of a lack of sponsors.

In total in his life he was the first African American to compete in the indy 500 and to drive a Formula One car. He won the Johnson Triple Crown for his placing in several important races. He raised his two children, Sasha and William Theodore Ribbs III, as a single parent. After he retired from racing Ribbs decided to pursue professional shooting, which inspired his son to pursue shooting. His son then became a professional shooter.

With such a successful racing career, it’s no wonder he was remembered for his achievements by being given the opportunity to race in the Indy Legends Charity Pro-Am Race in 2019 where he ended up winning with his co-driver Ed Sevadjian.