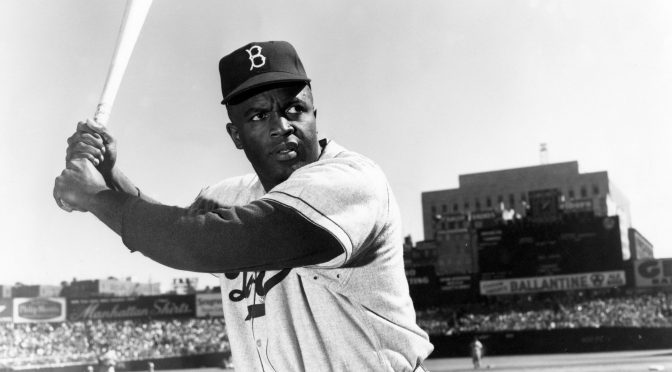 There are many prominent figures to look at for such a historic month. A lot of these figures’ stories deal with hardship, oppression, and inspiration. Though today you’ll take a look at the first black MLB player, Jackie Robinson.

Robinson was born on January 31st, 1919 in Cairo, Georgia. He was the son of Mallie and Jerry Robinson. In his early life, Robinson grew up in a family of 5 children with no father and little money. This forced him to make his own way in life, he picked up sports, playing football, basketball, baseball, and track all at once.

Robinson enrolled into Pasadena Junior College in 1939 and finished in 1941. He then went on to enroll in the University of California but in his third year had to withdraw from the school to help his mother take care of the family. After entering the army in 1942, Robinson faced court-martial in 1944, becaus he had refused to follow an order to sit on the back of the bus. Charges were dropped and he received an honorable discharge.

After the military, Robinson played two professional sports at once. Football in Hawaii and Baseball for the Kansas City Monarchs of the Negro American League. Doing so helped him draw attention from the Dodgers’ general manager, Branch Rickey. Trying to find a good candidate for integration, Rickey looked at Robinson. He had all the ideal characteristics: skills on the field, integrity, and his conservative lifestyle. Though Rickey needed to know if Robinson could handle the racial abuse that he would face when playing. That’s when the two first met Rickey shouted insults at him. Robinson was unfazed. On October 23, 1945 Robinson got signed to a Dodger farm team the Montreal Royals of the International League.

Robinson would find instant success, leading the league in batting average. After that season in 1947, Robinson was brought up to play for Brooklyn. He would go on to win rookie of the year.  In 1949, he won the batting championship. Robinson would also win MVP that year.

Up until 1957 when he retired prematurely, Robinson had built a legacy. With six league championships and one World Series victory. Robinson left his mark on the sport and inspired many young talents. He wasn’t done yet, becoming the first black person in the baseball hall of fame in 1962 and receiving the presidential medal of freedom.

Robinson started to become engaged with business and civil rights activism. He was a spokesperson for the NAACP and would be seen alongside Martin Luther King Jr. Even after baseball Robinson fought for change and the betterment of many lives. He once said “”I’m not concerned with your liking or disliking me… All I ask is that you respect me as a human being.”

This chapter of inspiration and hope would end on October 24, 1972 in Stamford, Connecticut. Robinson passed away at just 53 years old from complications with diabetes. This was heartbreaking for anyone who looked up to Robinson. Many label him as a pioneer given he was the start of a movement that still continues today for equality.