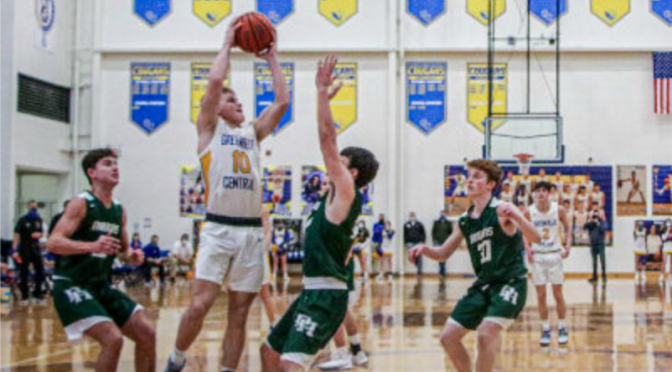 Photo Caption: Joey Roland, 11, goes to the basket during the Pendleton Heights game on Friday, Jan. 29.

The Greenfield-Central Cougars boys basketball team wasn’t supposed to be successful this season. At least, that’s what some people thought going into the year. As the season played out, though, it was clear that the projections some had for this group weren’t accurate. In fact, they weren’t even close. Under second-year head coach Luke Meredith, after losing five seniors, and much of their scoring from the previous year, the Cougars finished the 2020-21 season with a record of 14-10, earning just the second winning season for the program in the last 17 years.

The low expectations that many had for the Cougars was one of the main resources used to keep the group motivated, and it added loads of fuel to the fire to prove those who doubted the team wrong. “This group of young men were special because we were underdogs all year and always played with a chip on our shoulder. We knew we would be underdogs most nights and when you’re doubted, that continues to add fuel to your fire and additional motivation to prove people wrong,” Meredith said. “This group relished the fact that no one expected us to win 14 games, win a sectional game against New Pal, win the Alexandria Holiday tournament, have the second winning season in the last 17 years at GCHS. This group fed off that doubt from others and used it as a positive to prove them wrong. That was our identity and will continue to be our identity moving forward.”

While the Cougars are obviously happy about proving the doubters wrong, they aren’t satisfied with how the season came to a close. Adam Lester, 11, said, “It felt great to prove everyone wrong and win 14 games. We were doubted all season and fueled off of it. We made a solid run, but in the end, we didn’t get the job done. Until we bring a trophy home, we won’t be satisfied.” Gavin Robertson, 11, echoed similar thoughts to his teammate. “Looking back at the season as a whole, there was a lot that we accomplished, but we are never satisfied with where we’re at. The goal is bigger next year, and we are working to achieve a sectional and conference championship.”

The Cougars improved greatly in many areas throughout the course of the season, but one word is all that Coach Meredith needs to sum up the improvements: Culture. “This team cared about each other, were fun to be around, worked hard, and loved the process of practice, they understood what it took. We preach the standard is the standard, which simply means when someone pays to come watch Greenfield-Central boys basketball, they know what to expect: young men who will work hard, dive on the floor, hustle on and off the court, and represent our school, community, and program the right way. The biggest improvement from November to March was caring about each other and continuing to develop our CULTURE.”

As for next season, the Cougars feel like they can bring the momentum they obtained this past year into it and reach even higher levels of success. Leading scorer for the Cougars this past season, Dylan Moles, 10, said, “With how our season ended, we’re definitely hungry going into next season. We always feel like we are overlooked and slept on, so we’ll be ready to continue to wake people up next year. Nobody is satisfied, and we are ready to get to work and cut down the nets next season.”

Coach Meredith also believes that the program can build quite a bit off of the success from this past season, and with a complete buy-in from his players, believes that his Cougars squad will once again have the chance to surprise some people. “We can build quite a bit from this past season. We return our core with a group of players that logged a ton of minutes as sophomores and juniors. If these young men continue to buy-in and work hard this offseason, we have an opportunity to surprise people again next season. We will be undersized and doubted along the way, but that is who we are and I wouldn’t have it any other way. We just have to stay humble and hungry and be willing to put in the work in the dark if we want the opportunity to shine under the bright lights next season.”