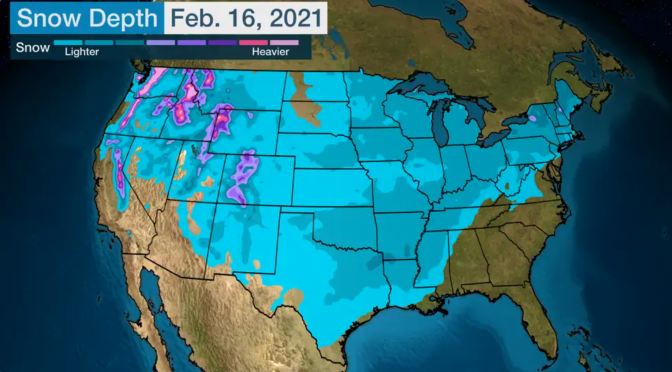 During the week of February 13-17, a winter storm came through North America. Places that usually don’t see the blanket of white, woke up to a little surprise on their doorstep. The winter weather stretched from the Rio Grande to Ohio. At first it was a treat, with posts on social media of people playing with the snow and exploring the vast pros and cons of the weather. Things took a turn when the weather worsened. Texas experienced many power outages leading to school closures and it is suspected that more than 70 people lost their lives.

Temperatures reached 8 degrees in Austin, Texas and -38 degrees in Hibbing, Minnesota, both temps breaking records in their respective states. State officials all over America recommended their citizens to stay home to avoid disasters on the roads. 10 people died due to crashes and poor road conditions. In 14 states, utilities called for a blackout which resulted from subzero temperatures. This left 300,00 residents of Oregon without power.

Chicago had issues after 18 inches of snow fell in some areas of the city. Every hour almost 2 inches of snow fell, though areas like the O’Hare International Airport saw a lot less snow. This snowfall helped to tie the record for the longest stretch of days with snow since 1884, when records were kept of snowfalls.

Chicago wasn’t used to getting this much snow this quickly. Todd Kluber, a meteorologist with the National Weather Service, stated, “We’ve had more snow in three weeks than we’d typically get in the entire winter.” 40.1 inches of snow had fallen throughout the three-week period, marking another record as one of the snowiest stretches. This total is about 5 inches more than the seasonal normal snowfall of 36.3 inches, Kluber said. https://www.chicagotribune.com/weather/ct-winter-storm-snowfall-totals–20210216-36pex67a5redhki3tnqfcdjh6q-story.html

Records after records kept getting broken by this winter storm. Over 73% of the lower 48 was blanketed with snow, the largest percentage since 2011, when NOAA began tracking show coverage. Texas was hit the hardest, due to its isolated electrical grid. The state had to rollout blackouts to conserve their energy.   Jessica Knofla, a Texan from Galveston, said of conditions in Galveston, “Basically, everyone who lives here had no warning and is stuck on a blacked-out island with no major stores open and no lights on the road. It’s absolutely infuriating.” https://www.theguardian.com/us-news/2021/feb/16/texas-weather-snow-storm-latest-news-power-outages-deaths

12 million citizens of Texas were advised to boil their water before consumption. Kelsey Muñoz, an intensive care nurse in Dallas, stated from the link above, “Currently, I have power and I’m hoping I am not jinxing myself by saying that. However, for water I’ve had to gather snow and melt it. Never thought I had to do that in Texas.’ ” Four million people were without power throughout the week all across the country, 3.5 million were in Texas alone. People were even told to stop dripping their faucets to preserve water for hospitals and fire departments.

The storm affected everyone differently. Some has a little bit of fun in the vast world of snow; others had very difficult conditions. One thing I think we’ve all learned from the storm: It’s time for summer.