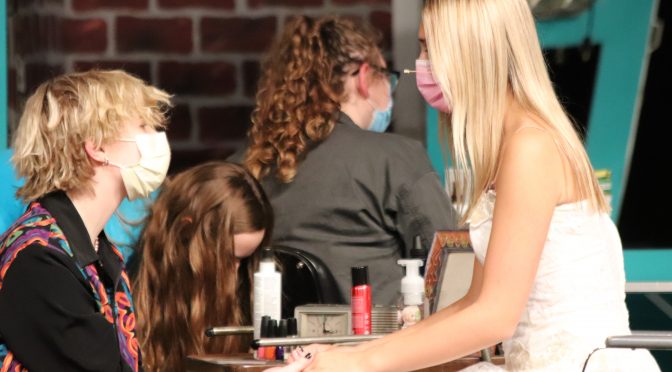 Photo Caption: Elle Woods, played by Brynn Elliott, 11, and Paulette Bonifante, played by Olivia McDaniel, 12, have a conversation in the beauty shop.

The drama club at GCHS has worked hard on every side to put on the production of Legally Blonde the Musical.  While COVID-19 has made it a different year for everyone, the Drama Club included, everyone has worked past that and the musical is ready.  Mrs. Carolyn Voigt, the director, said the positive energy that comes with this musical was just what people needed.

Legally Blonde the Musical is about a blonde woman who goes to Harvard Law School hoping to win back love before realizing she can be smart and dream bigger.  Hannah Kinion (student director), 12, said, “…there were definitely certain roles where we were unsure about placement and it wasn’t ‘t until callbacks that we ended up filling some of the most major roles.”

The actors have worked hard to memorize dance moves and lyrics.  Not to mention they have a bit of a workout song that definitely has them breathing hard.  One of the hardest parts would probably be having to sing while they dance, but everyone is working together and it is coming together.

Not only are the actors stepping up, but the set looks incredibly life-like.  Backstage crew has worked tirelessly to build sturdy platforms and the painting crew has worked hard, even with so much to paint and so few of them.  Thanks to help from actors, Mrs. Voigt, and DC, the backstage director, and others, the painting has been finished and helps bring the musical to life.

When asked what the best part of putting the musical together was, Coy Walden, 11, mentioned that he thought meeting everyone was one of the best parts of this musical.  It’s true that the play, Almost Maine, came before the musical and that he’s a junior, but the musical brings more people in than the play and there are always new people joining, of all grades.

He also said that he found watching how everyone works hard to build themselves and better their fellow cast members was pretty amazing as well.  People have worked so hard and its impressive, but it was definitely even more amazing to watch everyone grow with help from their friends and the result is an incredible show.

Not only are people working hard, but everyone seems to enjoy the musical.  Mrs. Carolyn Voigt, director, said, “Every single number is catchy – a sentiment supported by how often I catch our actors and techies singing the numbers in the hallways and in class!”

This is good news since the actors will have to practice, practice, practice vocals ever since plans changed.  The original idea was to have chorus records themselves to limit the number of people singing on stage.  Plans changed and now, everyone gets the chance to sing live, on stage!

Meanwhile, the backstage crew is working hard behind the live show.  The front stage where everything is seen by the audience looks life-like and seems to change for the actors need.  But behind all that, the pieces are whirling and spinning, fitting and clicking together in a giant puzzle of movements that never seem to stop.  Tirelessly, the backstage crew worked to build this puzzle and glam it up for the show, now they put it together and show off their hard work.

It seems that, even though snow days back a few months ago cancelled not only school days but rehearsals, nothing has stopped the Drama club and, even without some of their rehearsals, everything has come along smoothly.

Though snow days weren’t the only set-backs.  Unfortunately, the choreographer, though seeming to work tirelessly on dance moves for each and every song, was only able to make Tuesday rehearsals.  But have no fear because the student director, Hannah Kinion, 12, made sure she learned every dance move to every dance.  This way, even without the wonderful choreographer, Mrs. Laura Berger-Harmon, there in person, her dance moves are shown with great style and a bit of personality in the show, making them the same, yet slightly unique for each actor.

In the end, through the challenges of a pandemic, snow days, and scheduling, not only was a positive show picked out, but a show that has been taken and made their own by the GCHS Drama crew, actors, and tech.  As the song says, “Hey, hey, hey.  Be positive!”