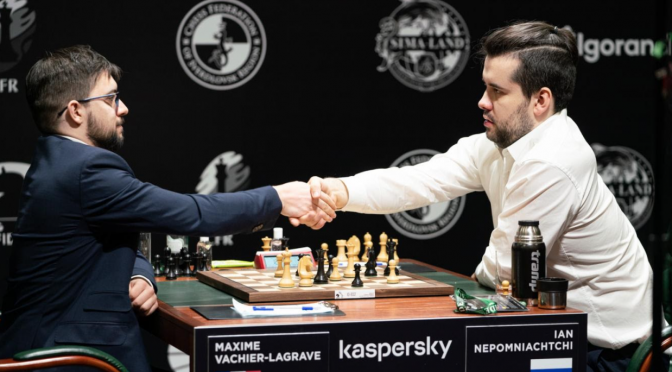 The game of minds. The game of war. Throughout the years chess has been called many things which is to be expected when it came out in the sixth century. With the game being out for so long you might be mistaken to think that the game has been figured out. That, like tic tac toe, there is a way to either draw or win every time, but that is not correct. Even to this day with things like computers and robots who can theoretically tie a game every time, the game is still going strong with new and inventive ways to play. And the best place to see these new and inventive ways is at none other than the FIDE National Chess Tournament.

FIDE stands for Fédération Internationale des Échecs(because of its headquarters being in Switzerland) which is where the chess champion of the world is decided. As of now the tournament is down to the last 8 players in Round 7 of the tournament. The players include Maxime Vachier-Lagrave (France), Ian Nepomniachtchi (Russia), Fabiano Caruana(U.S.), Anish Giri (Netherlands), Hao Wang (China), Alexander Grischuk, (Russia) , Liren Ding (China), and Kirill Alekseenko, (Russia).

The winner of the Candidates Tournament, which is an eight-player double-round robin tournament played in Yekaterinburg, Russia, will go on to face Magnus Carlsen, the current World Chess Champion in Dubai, United Arab Emirates. The tournament was originally scheduled for 15 March to 5 April 2020, but the tournament was postponed at the halfway point on 26 March 2020 because of the COVID-19 pandemic. The second half of the tournament will be played between 19 April and 28 April 2021, also in Yekaterinburg.

As of current the standings go Ian Neopmniachtchi in first with 8.5/12 points, followed by Maxime Vachier-Lagrave with 8, Anish Giri and Fabiano Caruana with 7.5, and liren Ding with 7, Alexander Grischuk with 7, Kirill Alekseenko with 5.5 points and last but not least Wang Hao with 5. The points are decided by adding up wins and draws (wins = 1pt, Draw = 0.5pt). With the tournament standings, it seems Ian Nepomniachtchi will face off against Carlsen somewhere between September and December in Dubai.