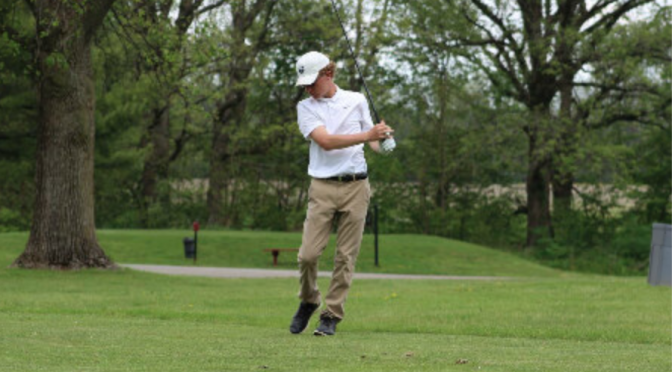 Photo Caption: Matt Kaser, 12, tees off at a home match.

The Greenfield-Central boys golf team has had some good moments this year, but are yet to have everyone clicking at the same time. At the conference tournament, it was another instance where the Cougars fell short of having it all come together. However, after a seventh place finish, the Cougars are more motivated than ever, and practicing hard in hopes to rebound from their struggles going into the final stretch of the season.

Trying to pinpoint the reasons as to why the team struggled the way they did at conference, Tyler Young, 9, says it felt like the team was just overwhelmed throughout tournament. “I think everyone was just overwhelmed during the entire length of the tournament.” Young said. “I think one of the biggest things for us moving forward is just learning to play our game no matter what the circumstances are.”

One thing that the Cougars can use for hope is knowing that they’re not too far off from performing at a level that will ensure success. Matt Kaser, 12, said, “To play our best golf we just need to keep practicing. It seems like every match we get two or three great scores and then we have a couple underwhelming ones to go with them that hold us back from being the team we can be. We have a lot of potential and we need to be ready to have it all come out.”

Something else that the Cougars are using for motivation is remembering the feeling of almost getting last at conference, and never wanting to feel it again. “We can bounce back from our bad performance at conference by just remembering how it felt nearly getting dead last, while also knowing we were one score off from being a top four finalis,” Kaser said. “That tournament has really hit us that we have to play our best if we want to keep this season going past sectionals.”

Of course, while the struggles at conference are disappointing, something that a lot of people seem to forget is just how young a lot of this Greenfield-Central team is. Not a single member of the Cougars squad had played in the conference tournament beforehand. On the topic of how young the Cougars are, Young, said, “I think considering that this is my first year of school golf, along with a lot of my teammates, we have almost done as much as we can do. If we can come together, though, we can definitely improve our scores.” The young guys have played a big part in the success that the Cougars have had, and it’s been great for multiple reasons for the entirety of the team. “We have a lot of guys who have never played varsity golf, So for our younger guys to step up and play like they have been, it’s special, and it adds motivation for the older guys to keep fighting for our spots,” Kaser said.

Now, with the conference tournament in the rearview mirror, the Cougars have their sights set on finishing the regular season strong before heading into sectionals. With the hard work they’ve been putting in, and the recent struggles adding fuel to the fire, the Cougars believe they have all the tools necessary for a late season surge.