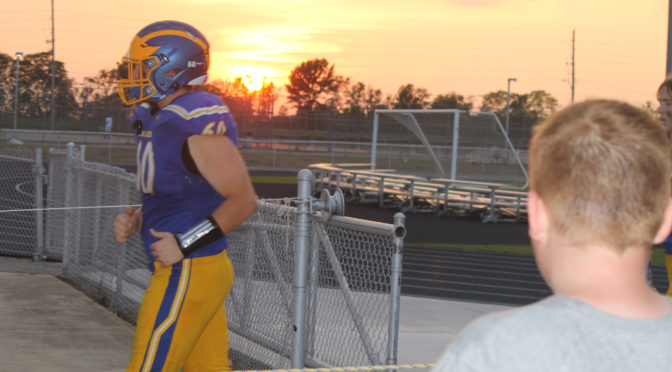 Photo Caption: Senior Larry Bellows, #60, runs on to the field with the Cougars.

The Cougars Football team is off to a solid start this season at 2-2 for both varsity and junior varsity.

Jackson Maciejewski-Haston, 9, who plays quarterback on offense and safety on defense, talked about what his goals,  personally and as a team, are for this season. He said, “My personal and team goals are the same — get better each week. We never want to dwell on the past or look too far ahead. We are focused on going 1-0 each week, and for me, I’m just trying to improve each week as a football player.”

Isaiah Sitton, 9, who plays left Guard and D Guard, had a very specific focus.He said, “My goal for this season is to beat New Palestine as a team.”

Joey Roland, 12, has been versatile with different positions, other than the offensive line. This year he will be playing running back and defensive end. He said, “The main goal is always to get better day by day and to obviously achieve a county championship trophy and a sectional championship trophy. A personal goal is to make the teammates around me a better person and a better football player. Playing football isn’t always about winning but more of becoming a better person and getting ready for your future.”

Travis Nolting, head coach, who has been coaching football for a total of 17 years (10 years as a head coach and 7 years as an assistant coach) talked about growing skills in the players that they can use in their own lives. He said, “My goal is always to try and develop a team that can handle adversity on and off the field and teach our players to be successful men of character.”

Nolting talked about who has stepped in to take the place of the seniors who graduated last year on the team. He said, “Since having seniors graduate last year, lots of players have stepped up to take their place on the team. High school football is all about stepping up and getting the job done. We have had a great group of hard-working guys step up and work hard this year.”

Sitton talked about what he thinks the strengths of the team are. He said, “We keep each other up.” Nolting added: “Strengths of the team would be our experience. We returned a lot of seasoned players and we will always work on trying to get better and better every day. The strength of our coaching staff is also experience. We have a great group of coaches with a wealth of experience. Some guys on our staff have been head coaches before and others could be. That makes my job a lot easier when I can delegate work to guys who I can trust.”

Roland also discussed the stability of the team. He said, “The biggest strength would most definitely be the defense. We have 9 starting seniors and all who have been a part of the program every year, and we all have 2-3+ years of varsity experience.” Maciejewski-Haston commented as well, saying, “I feel we have really strong senior leadership. Guys have worked really hard and are committed to moving GC in the right direction. We have a system that’s tough to defend and guys have really bought into it.”

Roland also talked about changes from last year that need to be enhanced. He said, “The weaknesses (of the team) would most likely be the offense. We lost almost all our starting O-Line from last year and the starting QB, so we have some guys playing in some new varsity spots this year.” Maciejewski-Haston said, “I wouldn’t consider us to have weaknesses, just areas of improvement. Our coaches do a great job of focusing our time on things we need to get better at. It’s early in the season so we just need to improve our timing on certain plays or recognize things on defense quicker. I’m confident we’ll get better at these things every week.”

Nolting talked about how they prepare the boys physically and mentally when they are facing a challenging opponent. He said, “The same way you prepare for every game. We prepare the same each week. Consistency is something we feel helps our guys grow and develop.” Maciejewski-Haston commented about what he does when he’s heading into a very competitive game. He said, “We try to approach every game the same because they’re all important. Personally, I just try to focus on my assignments for my position. If I know my job, then it allows me to go out and play fast and have fun.”

Roland’s take on the topic was, “Personally, you need to just focus and lock in, not hours or minutes before the game but almost days before the game. I start focusing on the big game mainly on that Monday of the game week. I have to be focused in practice mainly and I still have to be focused in the classroom.” Sitton said, “When I’m heading into a very competitive game, I pop in earbuds and think of the plays we run.”

Sitton said, “We build team-building skills among the team by trying our hardest during drills and build skill when we all work together.” Maciejewski-Haston said, “I think that a way we build as a team is picking each other up when we are struggling and are in a situation that might be bad. We also build as a team when we are hyped up and are ready to play together as a team.

Nolting concluded with a final comment about coaching this group of boys this season. He said, “The experience we return makes it really fun this year. Our players understand the basic system which allows us to be more diverse on both sides of the ball.”