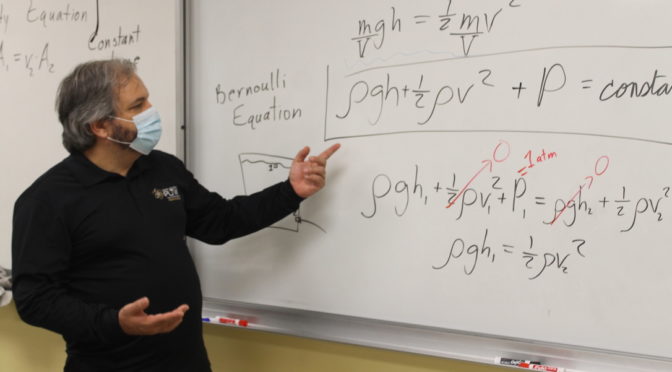 The rules of the universe: an interesting concept in theory but the process of learning the rules can become monotonous and tedious. Thankfully here at Greenfield Central we have great teachers capable of keeping people both interested and intrigued in the subject. One such teacher is Mr. Jeremy Buchanan, physics teacher in room 1139.

Buchanan began his teaching career in 2005 working at Bishop Chatard High School until 2007 when he moved to Franklin Central High School. After working there for five years Buchanan then moved once more to Greenfield Central in 2012. Buchanan commented on his reasoning for becoming a teacher, “I never wanted to be a schoolteacher. In my teens, I wanted to be a scientist – a physicist or an astronomer – but by the time I graduated college I was focused on family and children. Grad school didn’t seem a very practical course of action for me. Eventually, I figured out that teaching was a profession that suited my family life well without being boring. I think it’s worked out okay.”

Of course we all know Buchanan as the physics teacher, but what you might not know is that physics isn’t the only subject he specializes in. For instance, he also has minors in astronomy, computer science, mathematics and even English Literature. “A class in English literature each semester helped to give my education the variety that made it enjoyable. Natural sciences and the humanities are also more closely connected than you might think. Consider, for example, that one of the first professional achievements of Galileo was a pair of lectures delivered to the Florentine Academy on the science of Dante’s Inferno.”

A break from the daily monotony is what Mr. Buchanan gives to his students. One such student is junior Peyton Willits who said about Buchanan’s methods of teaching, “I feel that his style of teaching is really nice since he makes sure you’re engaged, which is pretty good when you have ADHD.” A common occurrence seemingly, with junior Dominic Smith saying something similar: “One of my favorite things about his teaching is how into it he gets.”

With such a wide love for his teaching, Mr. Buchanan clearly interacts well with students. He said of this ability, “Like a lot of people who are introverted and socially awkward, I find that a setting where I have a specific role makes interacting with people much more comfortable. It took me a lot of practice to be comfortable speaking in front of a classroom, but now I’m reasonably at home with it.” Another notable characteristic of Mr. Buchanan is his willingness to let himself get lost on tangents that keep his students engaged with him and keeps the feel of the classroom fresh. “ I love wordplay and storytelling in general, but I also try to consciously cultivate a style and a presentation that engages students and helps to keep things interesting,” Mr. Buchanan said.

With students using words like, “Quirky,” (Peyton Willits) and, “Goofy,” (Dominic Smith) to describe him, it’s pretty easy to understand he isn’t just your average teacher. When Mr. Buchanan was asked to tell a physics joke to conclude our story, he said, “I’m sorry. I only tell bad jokes. I’ll leave you with a limerick:

“There was a young lady named Bright

Whose speed was much faster than light

She set out one day

In a relative way

And returned on the previous night.”