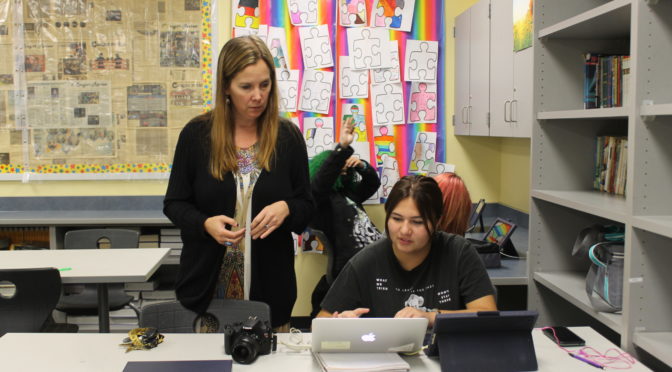 “Tell me and I forget. Teach me and I remember. Involve me and I learn.”-Benjamin Franklin.  GC teacher Mrs. Jill Bernard has been teaching for over 20 years. She has helped many people in a variety of subjects, ranging from English to journalism. Although only being at Greenfield Central for nine years, she has had an important impact on the students who have had her class.

Growing up in Rensselaer, Indiana, guided by her father’s love for writing and her mother’s curiosity, Bernard got very deep into journalism. After graduating high school, she went to Indiana University, majoring in journalism. Once she graduated, Mrs. Bernard taught in Frankfort, Indiana for 7 years. After her long run in Frankfort, she taught in Arizona for the same amount of time. Finally, Bernard made her way to Greenfield Central, as this year marks her ninth year teaching in Greenfield.

One of Bernard’s students this year, Lauren Blasko, 11, said about the teaching veteran, “(Mrs. Bernard) is really understanding, and she gives amazing criticisms that help to better our writing.”

Another one of Mrs. Bernard’s students, Jeanna Brown, 10, said the following about the former Who’s Who of American Teachers nominee: “The way Mrs. Bernard teaches is so free-flowing and confident, it really gives her lessons that extra step into helping her students, better than her teaching peers.”

The reasoning behind Mrs. Bernard’s career choices are very intriguing. For example, the reason she loves journalism so much is because she loves to tell other people’s stories. “Everyone has a story,” Bernard stated, “and relaying those stories to the world is an important job.” The veteran teacher is also very humble, given her answers when asked about how her friends would describe her: “I HOPE they would say kind, funny, and helpful.”

Bernard fills many students’ hearts with HOPE, as if she did not, there would be no one writing the GC newspaper, the Cougar Review. Bernard also talked about her students, and how she feels about them; specifically the misbehaving ones: “Most of the kids are good students. I like seeing kids develop, and I love helping students through their struggles.”

“Her overall personality.” This quote from student Jeanna Brown sums up her favorite part of Jill Bernard. Mrs. Bernard shows this “overall personality” by her response to her hobbies/reasonings for writing: “I enjoy making jewelry in my free time. I like to spend time with my family more, however.” Mrs. Bernard also stated a reason as to why she enjoys journalism so much. “I like writing about people. I like to tell their stories, and I like to get my opinion on certain events out there.”

Bernard states that her biggest achievement in life is having a family, a sentiment that is shared by many men and women alike, here in the U.S. Academically, however, Mrs. Bernard states that one of her biggest achievements is being nominated twice for “Who’s Who Among America’s Teachers,” in which a teacher, along with their picture, is put in a large book of America’s best teachers, nominated by America’s best students (the top 10% of students in their respective classes).

Bernard’s caring attitude towards all people, specifically her students, is shown in her way of teaching and her love for storytelling in writing. “A great teacher can teach Calculus with a paperclip and literature in an empty field. Technology is just another tool, not a destination”-Unknown.