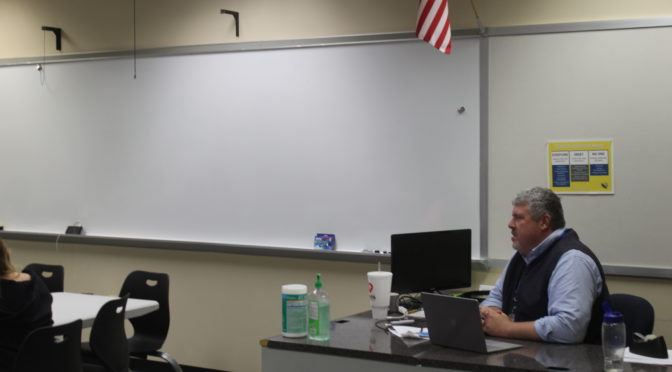 GC teacher Mr. Michael Lucas has been teaching business classes for 7 years. Lucas has only taught at GC for one year and he has made a positive impression on many of the students here. Students notice that he jokes a lot and lightens up the mood. He joined GCHS just a little before the pandemic.

Jeanna Brown, 10, said she wished more teachers were like him because, “He is so easy-going, his class runs smoothly, and he makes us feel comfortable and safe. Mr.Lucas is always willing to help us if we need it, answer whatever questions we have, though I feel like he makes us do too many slide presentations.”

William Henderson, also a business teacher at Greenfield-Central who has been teaching with Lucas for almost 2 years, describes Mr. Lucas as having compassion when it comes to teaching. “Mr. Lucas takes a very participative approach to education, always getting the students to interact with him and the students he is always willing to try new approaches, and I think he’s best at communicating.”

Lucas said what he thinks his greatest strengths and weaknesses are. “I think my strengths are communicating with students in a productive way, building relationships in the classroom to identify the needs of a student. I think that I am a good team player with my peers, and my weaknesses are administrative duties such as scheduling appointments, answering phones, and maintaining organized file systems for the organization.”

Lucas finished high school at Arsenal Technical High School in 1985 and then graduated from Marian University in 1989. He said he became a teacher because “I wanted to help young people, I have always wanted to teach. After twenty years in the business field, I was given the opportunity to be a teacher. That’s when I got my teaching certificate to teach students in the field of finance and business. That was seven years ago in 2014.”

His first day at GC was overwhelming as Lucas described it. He started in the middle of the school year and started over with a new school, after his last school, TC Howe closed. “(I had) New students, new procedures, new usernames & passwords. Mr. Henderson was a great help to get started and welcomed,” Lucas said. “The craziest thing that has happened since I’ve been here has been the COVID experience probably like every other school.”

Mr. Lucas described his typical school day. He said, “I have my classroom classes, and I have the Career Exploration students who sign out before work every day. There is a lot of traffic. On most days, I have about 160 students come into my room,”

Lucas then began to describe what he thinks is the best and the worst part of teaching. “In my opinion the best part of teaching is working with young people and seeing them learn and mature. It is good to be in a room with young folks who are positive and optimistic with their futures ahead of them,” he said. “The hardest part for me as a teacher is so many people having an opinion on what we do as teachers with no involvement or limited involvement in the process of the classroom. These are mostly people outside of the school in different roles. There doesn’t seem to be the collaborative effort and shared accountability in the student’s success as there has been in the past.”

Lucas had a bit of advice for people who want to go into teaching. He said, “Relationships in the classroom are important. Students learn in different ways. Don’t judge students by what you see or what you hear from others. Ask questions of your fellow teachers who are almost always very willing to assist.”