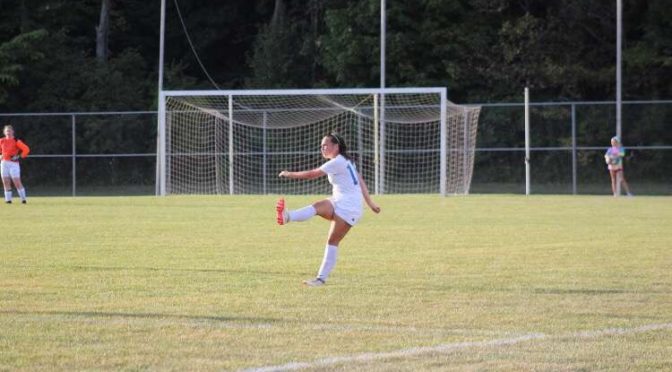 The girls soccer team was off to somewhat of a rocky start this year, but they still focused on their goals, and are moving forward with two wins in a row. Centerback Callie Means, sophomore, stated, “We talk about goals often on the team. We always focus on one thing at a time, so normally we prepare for the certain team we are playing for the week. As far as a major goal, we all would love to go far in sectionals.”

She also commented on how her second year on the team is going, stating “It’s been great so far. The team is more connected and closer with each other this year.”

Means discussed the differences from last year to this year, saying “We play more as a passing team rather than be physically focused.”

Means described what her position does for the team. She stated, “Our continuous job is to be the last line of defense and most physical people on the field. We also have to communicate well and constantly with our teammates.”

As far as preparation for the games, Means said, “We all like to listen to rap music for a better performance and have a pregame huddle right before kickoff. Myself, Carly (Means), and (Claire Davidson, freshman) all write “AO1” on our legs or wrist to remind us that we only play for an audience of 1 and it centers our focus.”

With all the pressure expectations can bring, standing out from the pack can be challenging. Means discussed what she does to stand out from everyone else, saying,  “I have been told that I can be physical but know where to find the good passes. I sometimes play in the midfield. My focus, game-play and role has to completely switch.”

Callie’s sister Carly Means, freshman, also discussed her thoughts about the season. She stated, “I’m really excited for the high school season. I think if we stay healthy we can be successful this year.”

Performing well as a player is a priority for Carly. “I plan to go out every game and give 100%,” Carly said.  “I will do my best to do what my team needs whenever they need it.”

As far as her role on the team, she stated, “I’m hoping I can be impactul for the offense. I’d bring a lot of speed to the team and make a lot of outside runs.” Means also spoke about how the transition was from junior high to high school. “The transition was good because I was super excited to play with my sister again. Our coach was also my club coach a couple of years ago,” she said.

COVID did affect the season, unfortunately. Davidson stated, “There have been players taken out and there has been at least one girl who  is missing most of the season. Also, there was no student section at first but in the past few games there have been more people.” She also spoke about how travel is different. She stated, “We still get to ride a team bus but we don’t get to pick where we sit and we have to wear masks on the bus.”

The girls team may have started off with a rocky start but there are still plenty of games left to have a good comeback season. The girls seem ready and know what they have to do to reach their goals.