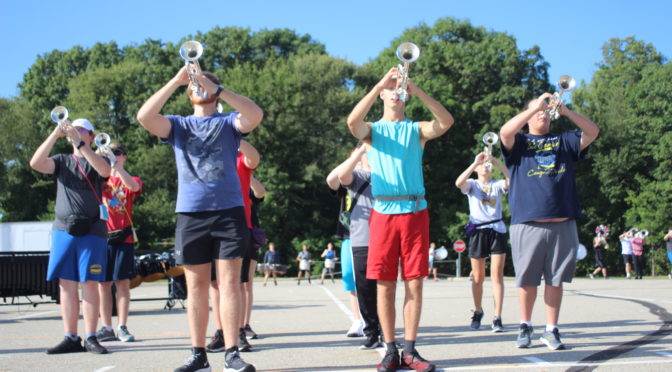 AFTER THE CHAOS OF 2020, THE GREENFIELD-CENTRAL MARCHING BAND WORKS TO MAINTAIN THE TITLE OF STATE CHAMPIONS

GREENFIELD-CENTRAL (August 30, 2021) — Last Year, 2020, was one of the most unusual and chaos ridden years this decade. Most of these problems were caused by COVID-19, the marching band being no exception with their competitive season being cancelled due to the complications of the virus. The Cougars still performed in front of an audience but not to the normal degree they would have when they would be able to do a full year. Despite all of the complications, the marching band put on a strong show during the year of 2020.

Come 2021 and the marching band has been able to truly prepare the 2020 show “rAMPed up” for a competitive performance. “I think it’ll be a blast for people to watch,” said Jeremy Turner, one of the head directors of the marching band. “This show will be a production that will stick out in people’s minds, in a good way!” With this year’s marching band being of 140+ members, keeping social distancing and COVID safety in check has been a struggle. Turner commented on the biggest struggle of the 2021 year for the band. “It has been navigating quarantines. Looking at some days with a large number of groups out because of contract tracing.” While things still look grim in this “new” way of marching, the 2021 Cougars have been able to navigate and pull off a full show to perform in front of an audience.

With the new year of 2021, the marching band scene has been put back to what it was before, this meaning the marching band will be able to put on “rAMPed up” in front of a large audience across Indiana. Turner then commented about how the marching band would do competitively: “When this 2021 band is cooking? They are as good as any group we’ve ever had. If we can continue to grow the way that we have then I think the year will be a special one for all involved.” With competition season approaching rapidly, the Cougars prepared to put on their first show since 2019 in which they had become state champions. When this story is being written, the Cougars are only a few days from their first competition in Brownsburg, Indiana.

Mr. Turner also commented on what his favorite part of this year’s marching band was, He responded: “Easily one of the most fun groups we’ve had. Even on days that are tougher, there are still so many smiles and laughs. They are just generally a positive group. And perhaps more importantly, a group that enjoys being around each other.”

Mr. Chris Wing, Gc’s primary band director and head of the marching band, commented a similar thing: “Every day, I get to hang out with some outstanding young people who are the opposite of what everyone thinks about teenagers.  It’s easy for adults who don’t interact with them every day to say teenagers are lazy, entitled, scared of working hard, etc.  Every day, I get to watch the exact opposite happen. I watch teenagers work hard, collaborate, struggle and persevere, and achieve great things.”

One of the “great things” this group was able to achieve recently was a second place finish at the marching band competition on Sept. 11.