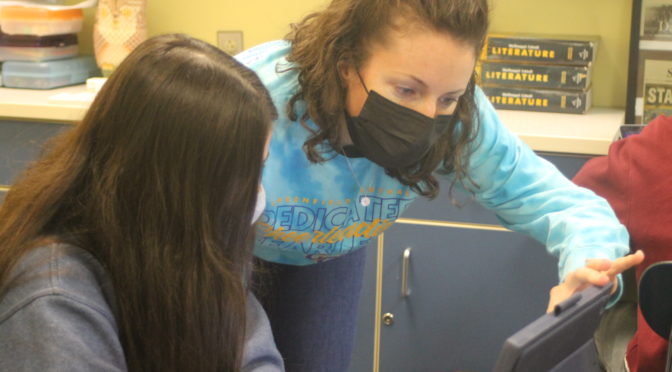 Greenfield Central High School has had many English teachers throughout the years. Many of them have worked there for a long time, like Mrs. Laken Rosing. Rosing has been teaching at Greenfield-Central for 8 years.

Rosing said she knew exactly what she wanted to do when she applied for college. Rosing stated, “I knew at 17 years old what major I wanted to as I applied for colleges. I knew I always liked helping and working with people. I always found teaching appealing and loved working in the classroom.” Rosing said that she really likes teaching high school students because she thinks at this age teenagers need good influences and mentors to help them. Rosing stated that unlike last year, she feels like this year she has gotten to get to know her students. Because of the mask mandate last year, Rosing stated, “I feel like last year it took two or three times longer to get to know my students, partly because of the hybrid schedule and partly because of how people were on edge.” Although now GC is operating under a mask mandate, at the beginning of the year, there wasn’t a mask requirement. Rosing stated “Without having the masks I could see people’s facial expressions. It made engagement from students so much higher this year than last year.”

Something that is new and different for Rosing this year is now she is teaching all juniors and additionally for the first part of year she had a student teacher in her classroom. At the beginning of the year Rosing said, “I didn’t know how to feel about having all juniors, but now I like it because I have gotten to know a lot of the junior class.” Along with the changes in switching to teaching all junior classes, Rosing found out a week before school started that she would have a student teacher, Mrs. Brianna Perry. Rosing stated how she and Mrs. Perry discussed what she needed to get done for her class, and under Rosing’s guidance Mrs. Perry did the exact same unit that Mrs. Rosing would have done.

Having Rosing as a mentor, Mrs Perry, the student teacher, stated that she learned a lot from her. Mrs. Perry, following that, stated how she really enjoyed the way Rosing cared for her students and how she brought her personality into the classroom. Mrs. Perry said, “I think the importance of caring for students inside and outside of the classroom, and love like Christ.” Mrs. Perry said how she enjoys the way that Mrs. Rosing grades because of how she does it out of effort and how much a student puts into the assignment, not just the grade they got. Mrs. Perry stated, “I think she is very personable and easy to talk to. She is not afraid to give feedback, but the way she approaches it is like a friend giving you advice.” Having a student teacher was really different for Rosing, but Mrs. Rosing ended up being a mentor and friend to Mrs. Perry, even with her short stay.

Mrs. Rosing hasn’t had just an influence though on just student teachers, but also her students as well. Joshua Pierce, 11, stated, “I have enjoyed having Mrs. Rosing as a teacher over the years. She has more of a hands off approach that helps you learn but mostly grow.” Rosing helps her students grow in their English abilities. Pierce stated how his abilities grammatically have grown because Rosing doesn’t give him the answer right away; she lets him figure it out for himself to improve. Kammi Anderson, also 11, stated, “Rosing has always been a teacher that keeps my attention and validates my feelings. I feel like I’m treated like a person during conversation, and the beginning conversation is wonderful.” Anderson stated how her English abilities in writing and better wording have significantly improved with having Rosing as her teacher. Pierce stated, “She’s a dope teacher, and she would probably hate me for saying that in the newspaper.”

Mrs. Rosing strives to have a great influence on her students, to be a mentor for everyone, and to have a positive attitude.