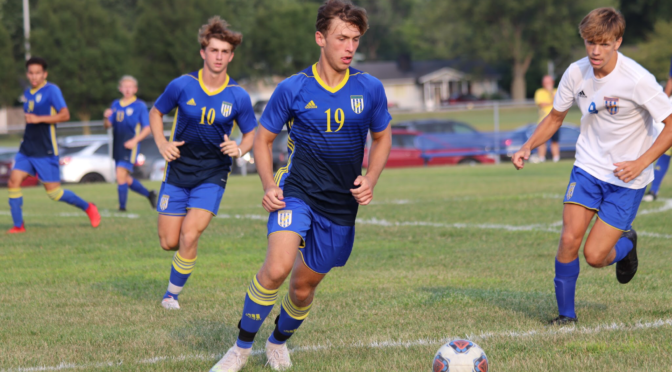 Holden stated of the work put in during the season, “We have a great coaching staff and practices are well coached. I feel we have hard working players who show up for practice and do what is asked of them.”  Coach Holden is confident in his players and is very dedicated in making them the best possible players they can be.

Holden also discussed how the offense can improve next year. Holden stated, “We are in need of more goal scorers. The team will continue to work on finishing and being aggressive when trying to score.”

In terms of defense, Holden stated, “Our defense has been great this year. We will be looking for players to step up into the missing roles going into next year. Practicing defensive skills during the off season would be a great step to getting better for next year.”

Holden commented on the team captains and the leadership on the team. He stated, “We have two senior captains, John Halvorsen and Logan Stoeffler, and one junior captain, Bryce Kinnaman. They did a good job leading the team. We will be looking for someone to come in and show great leadership with BK for the next year.”

Holden said in terms of goals this year, “I think we struggled at times to stay focused on some of the main goals but we did well to win conference and play hard in the postseason tournament.” The soccer team performed very well this year, winning conference, which was one of ther goals but fell just short of one of their main goals in the post-season.

As far as room for improvement goes, Holden said, “I always review the season and think of things I could have done better. Without naming specifics, of course I can always improve on the previous season and I will continue to try and do that.” Looking forward, Holden also talked about how new kids come out every year and join the team, stating, “I’m always happy when we find new players who want to join our soccer family. We have had more and more kids come out for the team over the last 6 years and it’s great to see the program growing and kids wanting to join.”

Tyler Kerkhof, 11, discussed team chemistry. “Our chemistry is very good. We hang out a lot on and off the field which brings closer combinations that are important. The culture is one of the best I’ve seen. It speaks for itself with the amount of time we spend with each other on the field.”

As far as improvements go, Kerhof said the team could improve on “(f)irst touch, paying attention to details, and taking time outside of practice to get better on your own.”

Kerkof some questions about his goals for the team next year. He stated, “Obviously win a sectional title and win conference.”

In the offseason for preparation, Kerkhof said he would “work in the offseason and getting together and playing together with the team in the summer to keep our skill.” Kerkhof described his accomplishments this season as, “I did good and better as the season continued, and you can always improve on getting in better shape and IQ of the game.”

Michael Runions, 11, discussed the role he wants to have on the team next season. He stated, “I want to be a role model to the younger players and also to be a motivator to the whole team.”  As far as goals for next season, Runions said, “I want to be a regional champ and I want us to be undefeated.”

Of improvements for next year, Runions stated, “The team needs to condition more and watch film and stay mentally prepared and get our bodies to our best.” He also stated, “We can go undefeated and we can all get good grades and I think we can push ourselves to be the best team we can be.”

The final thing Runions discussed was one thing he was proud of the season that he accomplished. He stated, “I kept the shutout in the Newcastle game as a goalie.” Runions has never played goalie in high school so when he went in he truly didn’t know what it was going to be like and played even better than he expected.