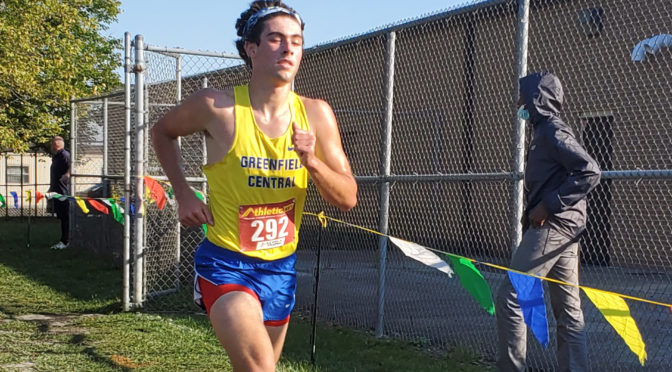 Photo Caption: Griff Wheeler runs during the sectionals match where the team placed third. Wheeler went on to place top 10 in Regionals.

Photo Caption: Griff Wheeler runs during the sectionals match where the team placed third. Wheeler went on to place top 10 in Regionals.

On average this year the XC team finished top 5 in almost all of their competitions. They had occasional first, second, and third place victories. Some team members for XC were interviewed about their performances this year.

Starting off with Griffen Wheeler, Wheeler was asked about his favorite part of the season. His response was, “Definitely just waking up every Saturday and being able to run with my teammates.” Wheeler said he prepared for sectionals with “my pre-race beef jerky, a lot of ice baths, and some easy runs.” He also commented about the teams overall performance, “We had a really good team performance late in the season from our team, even though we were missing our #2 runner Chris Ross.”

Ross said the effort put in by the team made a difference during the length of the season. “One thing you should know about our team is that we are one of the most hardworking teams you will ever see,” Ross said. “We have practice 6 days a week for the entire season and no break until the season is over. Having to run 11 miles in one practice is definitely difficult, but pays off in the end.

Ross discussed what keeps him going while he is running. “The thing that encourages me the most while running is improvement in races,” he said. “You may not think that you are getting much better during training, but you usually see huge improvements when the season starts. Beating your 5K time from the previous season by almost a full minute can be very rewarding.”

The team is able to bond because not only do they work hard together but they also relax together and spend time getting to know each other. Ross said, “Every Friday we have a spaghetti dinner. A member of the team hosts it, and we talk about our cross country season and general life. The team has gotten to know each other very well this way.”

Griffen commented on his performance at sectionals, “I think I performed really well. It wasn’t my fastest race but it was a good time on a bad course and a good place in a stackfield.” He also replied to what he did well in cross country. “I hope I was a good leader and teammate to my team. And most importantly pushed my team to be their best day after day, and helped hold everyone accountable when someone was slacking off possibly.”

Mason Kojima, a senior runner, commented on what his favorite part of the season was. He replied, “Going back to normal and having regular meets like in 2019.” Mason commented on what he would have improved on when running this year. He said, “I personally could’ve worked harder throughout the year.” He was also asked about what he did well this year. He said, “I took Devin Evanoff under my wing to make him a better runner.”

The Greenfield Central Cougars’ cross country team looked good this year and it sounds like they are out and ready for more next year as they strive to be a more complete and competitive team moving forward.