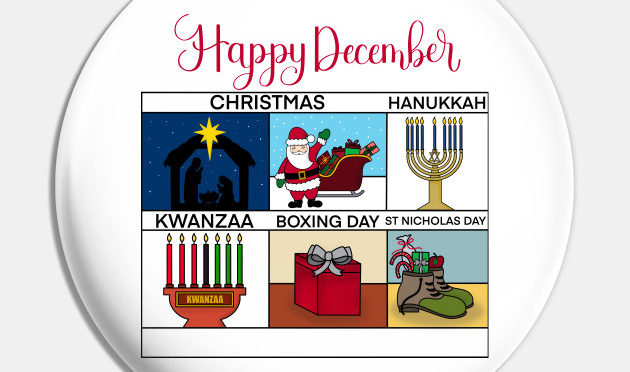 Holiday traditions are important for many people. This season we wanted to take a closer look at various traditions celebrated in December: Christmas, Hanukkah, and Kwanzaa.

Corey Burts, 34, a former Hoosier who now lives in San Jose, CA, is my uncle who has always loved Christmas. He goes all out every year. He will have a show set up for cars that pass by. You would tune into a specific radio channel that he has on a sign by his front lawn. Music will play while light flashes to the song. “What I like about Christmas is the feeling of it. Yeah, I like presents and giving them, but it just feels like everyone is a lot happier,” Burts said. He celebrates Christmas with his wife and two kids. He has Christmas dinner with his mom, dad, four sisters, two kids, wife, and the sisters’ kids and husbands. “We usually have turkey, gravy, cranberry sauce, honey ham, vegetables, and fruits.”

Adam Sterling, 22, from Evansville, IN is a family friend of mine. He is of Jewish descent and was born on the first day of Hanukkah in 1999. “I celebrate Hanukkah because of my religion and that’s because my holiday is religious based,” said Sterling.

Hanukkah is celebrated over a period of eight days. The eight candles represent the number of days that the Temple lantern blazed; the ninth the shamash, is a helper candle used to light the others. Sterling celebrates with a lot of family: his mother, father, grandmother, brothers, sisters, cousins, nieces and nephews. Sterling said, “We usually play games like the dreidel. We eat oil-based food like latkes (potato pancakes), sufganiyot (Israeli doughnuts), and lots of singing.” The reason people who celebrate Hanukkah tend to eat fried foods is because it symbolizes the small amount of oil that miraculously burned for eight days instead of one. “One of my favorite things about Hanukkah is how long it lasts. Eight days of me and my family every year is really nice.”

“One thing I hate about my holiday is the oily fried food, I don’t find it healthy or really tasty,” Sterling said. Hannkuah is celebrated all over the world. Today in America there are 5.8 million Jewish people. “The origin of Hanukkah is that it began over 2,000 years ago in Israel.” said Sterling. Hanukkah is one of the biggest religious holidays in the world and is still celebrated every year.

Grayson Zurwell, 14, from Greenfield, IN, is my friend who has celebrated Kwanzaa for the last 6 years. “I still consider myself very new to the whole Kwanzaa thing,” Zurwell said.  “I celebrate with only my dad, and we eat collards, mac and cheese, gumbo, and jerk chicken.” Grayson grew up celebrating Christmas for most of his life but when his dad asked him if he wanted to celebrate Kwanzaa instead for the experience, all of that changed. He felt something with the celebration of African culture. “I celebrate Kwanzaa because it’s not religious but it appreciates a culture that I was raised around” Zurwell said.  Kwanzaa is an annual celebration of African-American culture that lasts from December 26 to January 1. “Kwanzaa celebrates African culture for 7 days, originated from America, and It was the goal of a doctor or professor to bring African communities together,” Zurwell said.

“The thing I like about Kwanzaa is the food and learning about African Culture but one thing I don’t like about it is how long it lasts because I sometimes forget to do some of the traditions,” Zurwell said. There are about six million people in the United States that celebrate Kwanzaa every year.