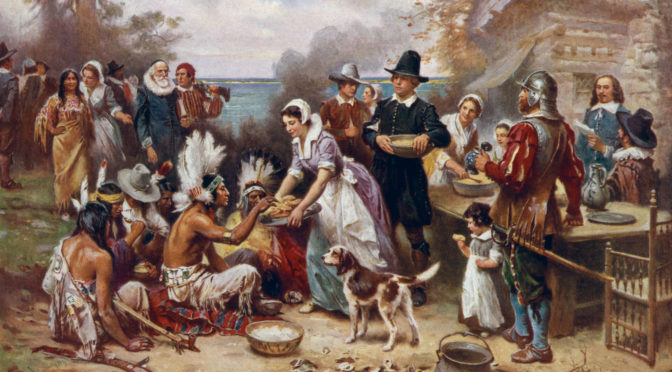 A holiday and tradition held by many in the United States and Canada, dating all the way back to its start in 1621: Thanksgiving. The Plymouth colonists and Wampanoag Native Americans would come together to celebrate one of the first Thanksgiving celebrations in the colonies, though many claim to have had the “first” Thanksgiving. This day is heavily regarded by historians as the first true celebration of gratitude. Now, in the present day, it’s a good question to revisit : Do we still value the meaning and purpose of Thanksgiving, or are they buried by the excitement of the Christmas season?

A time to give thanks for all the fortunes obtained in the past year has now turned into a rush to purchase gifts for the holiday season. Black Friday completely overshadows Thanksgiving. Once the clocks hit 12am, it seems everything about Thanksgiving is lost in memory. In a survey taken by finder.com, 28% of the surveyed American adults will participate in deals on Black Friday in 2021, while 58% say they’ll participate in other holiday deals. Countries all over the world are prepared for Christmas even before the start of December. It’s starting to seem like an obligation for some people to host a Thanksgiving dinner.

Whether you’re religious or not, there’s still a spiritual aspect of Thanksgiving. If you just flip flop the two words that make up “Thanksgiving” you have your answer: giving thanks. In better terms, gratitude. Remember the Gratitude song from the beloved show “Spongebob Square Pants.” Yeah, that’s what it’s all about: being grateful for all the good things life’s handing you on a silver platter, though when the last Thursday of November comes people only see it as a day for a big feast and to eat as much as they want. “Turkey Day” is a nickname for the day held by many, presenting the possibility that maybe it’s the only reason they celebrate Thanksgiving. How could you show gratitude in the spirit of thanksgiving? Donating to a food pantry or charity, or inviting those who may not have anyone to spend Thanksgiving with to spend it with you is a great way to give to those who are less fortunate.

Why should you give thanks and show gratitude about the people or things around you? According to Harvard Health, showing gratitude actually makes you happier. A study carried out by Dr. Robert A. Emmons of the University of California, Davis, the leading scientific expert on gratitude, and Dr. Michael E. McCullough of the University of Miami put people into three groups to see what happened when people thought about their blessings. The first group would write about things that occurred in their week that made them grateful. The second group would write about things that irritated or displeased them during the week. The third group would write about events that affected them with context on whether or not the events were positive or negative. After 10 weeks, the first group proved to be more optimistic and felt better about their lives.

Thanksgiving is meant to give you a dose of optimism about your life, a chance to reflect on all the good present in your life, not to be the kickstart to the shopping season or being stressed about what you’re going to get someone that you only see once or twice a year. Thanksgiving is more than just a feast