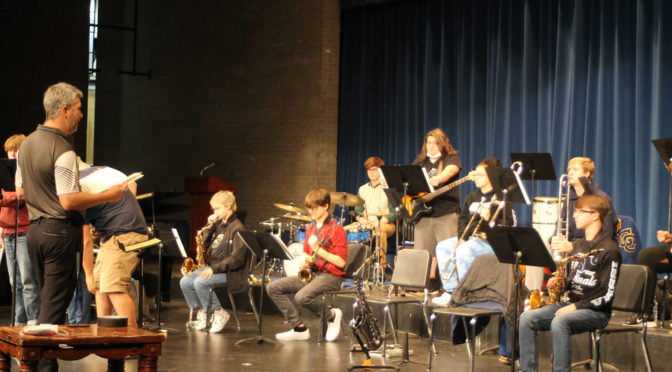 Greenfield Central earned the title of state champion for the second time in marching band competition. This was a huge success for the fine arts department because of the gap year from the 2019 state championship to the 2021 title for achievement. Many people believe that the students were the major reasons for the success, but so were their staff members.Their band director, Mr. Chris Wing, deserves a lot of the credit, although he will tell you otherwise.

Mr. Wing has been in the marching band world for 30 years now. From his years of experience, Mr. Wing is used to having the pressure of being the band director on his shoulders, but he is also a band teacher and a father of four at home. Through all of the years in the marching arts, Mr. Wing had known what the outline of a normal marching band season looked like, until the season of 2020. The competition season for marching band was cancelled. It was a upsetting thing for the students and staff of the marching band, but instead of doing nothing, Mr. Wing had the students and staff do a shorter and less time-consuming season. Mr. Wing, in 2021 now, said that the 2020 season helped them for the following year. There were many differences between the marching band season of 2020 and 2021. One of the major differences between the two seasons was the family atmosphere that is often created between the students and staff. Mr. Wing said, “One of the things that was impossible to replicate last year was the family atmosphere we (usually) develop. Because our time was limited and because there was no travel, we struggled to build that environment and had to recreate it this year.” Even with the setback by the 2020 season, with the new 2021 marching band season Mr. Wing believed he gave his students the necessary fundamental skills to be successful.

Mr. Wing though isn’t all alone, though. He has multiple staff members who help each one of the sections in the band. Mr. Sean Widmer is the percussion director and has been working with Mr. Wing for 10 years now. Through that time, Wing has been Widmer’s band director and one of his great friends. Through all their conversations one of the major things Widmer has learned from Wing is, “How to react to a situation. Life deals us many hands, both good and bad. How you respond is what really matters.” Through the bad and good times, both Widmer and Wing, with the other following staff members, have been there for one another. Widmer said that Mr. Wing has had an extraordinary influence on him, and that he and Wing aren’t just staff members but are good friends that have had, “lots of laughs, lots of life advice, lots of hang in there’s. It’s been a joy.”

Wing also has another staff member that has worked alongside him for a long time, Jeremy Turner. Turner, the performing arts secretary, is the main staff member for helping the wind players, mainly the woodwinds.Turner was actually part of the musical arts department a couple of weeks before Mr. Wing arrived at the school. Turner didn’t know what to expect when Mr. Wing was about to join this arts department. Turner stated, “I didn’t know if I would be here 10 years later, but it was a feeling-out process and now he is for real one of my best friends.” Through the years they have been together, they have had many heartbreaking moments but also really heartwarming ones too.  Turner said, “At the end of the run (performance for state finals 2019) it was emotional and my eyes got a little foggy, and at the end of the run I’m always the last one off the field to make sure there is nothing left.” Both Turner and Wing knew that the performance had touched both of their hearts. Turner said, “He  just smiled at me and I said “Stop man, stop man” (so that Turner wouldn’t get emotional) and he wrapped his arms around me as he does like a big bro.” Through the years together Turner and Wing have watched the Greenfield-Central Marching Band grow.

Through the difficult, emotional, and fun times of the marching band, sometimes it can be hard to get your students motivated to want to continue working hard after many months. Wing, and the other staff members, help their students continue working hard by giving them the motivation to help them. Wing enjoys being a part of the marching band program because he knows the reward of it. Wing said, “Knowing you contributed to the success of a team is an irreplaceable feeling. That’s the payoff.” That’s what drives Wing to push his students more every single day. He knows the reward, so he wants to let his students see it too, and sometimes that ends up with becoming a state champion. Wing has a major influence on his staff and students. That’s what makes his marching band so successful.