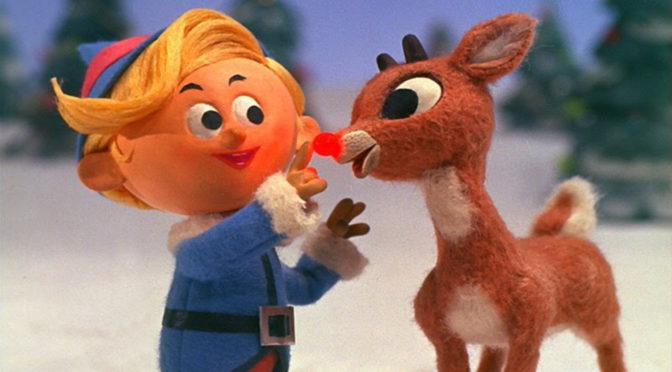 Christmas, as told by Andy Williams, is the most wonderful time of the year. And what is there not to love? With traditions like decorating the Christmas tree and opening presents on Christmas Day it’s hard to not be infatuated by this holiday. But one tradition sticks out amongst the rest, and that’s our tradition of watching several of the Rankin/Bass movies like Frosty the Snowman or Jack Frost. But one Rankin/Bass movie, like its main character, will “go down in history.” Of course I’m talking about the stop motion Rudolph the Red Nosed Reindeer movie. Even with this movie coming out in 1964 – 57 years ago! – millions of people today take time out of their busy schedule to watch this genuine classic. So before you see it this year, I thought I would give you some history on arguably the biggest Christmas movie ever.

As I said earlier, Rudolph the Red-Nosed Reindeer came out in 1964 and was produced by Videocraft LTD. “Videocraft LTD?” I can hear you saying, “I thought the movie was by Rankin/ Bass?” And you’d be right. Videocraft LTD would later become Rankin/Bass after the creators Aurthur Rankin Jr. and Jules Bass decided on a name change, but back to Rudolph. Rudolph’s first airing was on December 6th 1964, and it has shown every year since, making the movie the longest running Christmas special ever.

To be running for this long the plot must be outstanding, right? Well here’s a quick rundown of the plot so you can decide for yourself. The movie starts with Sam the snowman reminiscing about the Christmas that was almost canceled because of a big snowstorm and about how Rudolph saved Christmas. We then cut to Donner and his wife who has just given birth to Rudolph. They notice his bright red nose and Santa comments on how he won’t be allowed to be in the sled team. Donner reacts by covering this nose so he can appear normal amongst his peers. This leads to a mishap later on in life where his nose gets revealed to his class and his teacher expels him. From there he meets Hermey, an elf who ran away to pursue his dream of becoming a dentist.  Rudolph decides to run away with him. From there they travel all over the North Pole meeting people like Yukon, a prospector looking for silver and gold, and the Island of Misfit Toys whom they befriend by promising to have Santa deliver them to kids. Some time passes and he grows and leaves his friends out of fear of his nose endangering them. When he returns he finds that his family is looking for him and sets back out to find them. He finds them being attacked by the Abominable Snowman and attempts to help, but he gets knocked out by the monster. Hermey and Yukon save the day by tossing the monster over the cliff, but before he is fully over he grabs Yukon and they fall together. After returning back Yukon turns out to be alive and has a now tamed Abominable Snowman in tow with him. Santa enters and announces that because of the snowstorm outside he can’t make his trip around the world for Christmas, but then he sees Rudolph’s glowing nose and has the idea to have him lead the slay. They ride off towards the island of misfit toys to deliver them and Santa says to have a good Christmas as he and Rudolph fly by the screen.

While the film does show its age upon repeat visits compared to the advancements in film seen commonly throughout film today, the retro style of the stop motion animation is always a charming reminder of the lengths directors would go to to create pieces of art. The animation of the film itself took about 18 months for every half an hour of the movie and with the movie coming out to roughly an hour in run time. That’s a whopping three whole years of filmmaking. To put into perspective it took Avengers Endgame with it’s 3 hours or runtime a whole five months to finish filming. That’s triple the total runtime in about 1/7th the time, though you’d be mistaken to call the creation methods of the film to be slow. You have to keep in mind that each time there is even the slightest hint of movement in a frame that there is a pause in real life where someone came over and moved a prop or puppet in a very deliberate way so that the movement seemed lifelike. Thus was the painstaking nature of stop motions animation.

The marvel of Rudolph does not end just with the movie, however, as the tales of the original puppets continue. With the movie being made entirely with practical effects came the notion that someone had the original puppets used and that made collectors everywhere excited. One of the original Rudolph puppets is currently owned by Arthur Rankin, Jr. The others were said to have been given to a secretary. The secretary had given the puppets to family and the dolls were lost until in 2005 when two resurfaced on Antiques Roadshow. A young Rudolph and Santa were seen in poor condition because of having been played with and put into storage for an unknown amount of time. Though at that time they were said to only be valued at about 8-10 thousand. They were bought by Kevin Kreisler that same year and restored where they were then auctioned off at $368,000. Afterwards they were donated to a museum where they can be admired for the pieces of art they are.
With the holiday season just around the corner and the Christmas movie countdown in even closer proximity, it’s important to recognize the not-so-modern masterpiece of stop motion animation that is one of if not America’s favorite Christmas movie of all time. And now that you know a little about the history of the classic you can enlighten your friends about the interesting history of Rankin/Bass’ Rudolph the Red Nosed Reindeer.