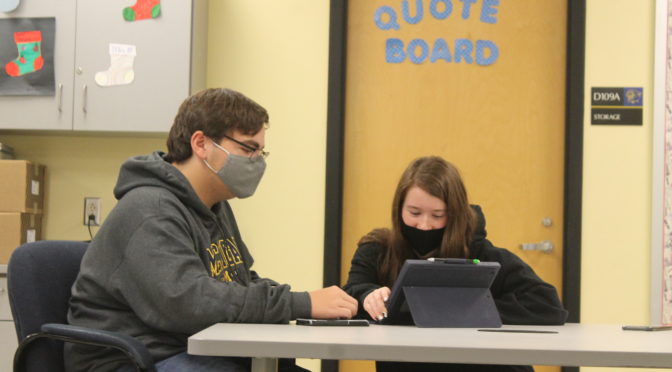 Greenfield-Central offers multiple classes such as journalism, newspaper, and yearbook for any student interested in writing. For those who want to learn more about these classes, Benjamin Brunsting, junior, Lauren Blasko, junior, and Hayley Herrin, sophomore, share their experiences in these classes.

Benjamin Brunsting, a newspaper and journalism student, said he has learned useful information and good life skills from taking this class.

“I did learn how to be more productive which has and will continue to help me throughout my life,” he said. “I learned how to be productive from being a procrastinator and putting my story off till the last week and then rushing around to get everything ready.”

Brunsting has inspirations of his own to continue this class. He said what got him into newspaper class was a desire to grow as an editor.

“After high school I plan to go to school for Radio/TV and experience with news and editing could help me become better for the sake of accomplishing that goal,” he adds.

For many students in these writing classes, coming up with something to write about or how to go about writing it can be difficult. Brunsting said that something that helps him stay on task and complete stories is “caffeine.”

“For me personally the hardest part is coming up with a topic because once I have one I can use it as a goal to reach,” said Brunsting.

Brunsting has a certain preference when writing stories. His topic of choice lets him have fun with his writing and makes it easier to enjoy the process. “My personal favorite type of news story to write is closer in nature to being a research paper,” Brunsting stated.

For Brunsting, the writing process can be a very satisfying experience once it all comes together.

“The feeling of creating a story and spinning words to create that story is wonderful to me,” he said. “I enjoy the feeling of having an idea go from just a couple of words to several full length paragraphs.”

“I like how freely I am able to write about subjects, and every time I write when I get criticism about it, I always want to improve,” Blasko said.

What helps Blasko write her stories is finding information about things most students don’t know about, “especially behind the scenes of something.”

“I’m a person that really enjoys talking to people and debating things so when it came to the creative project I really liked the idea of arguing something,” said Blasko.

She said she likes talking to people, and with that she likes finding out new information from teachers and other students that she’s close to.

“My inspiration is to give people different perspectives of people. For example Mr. Wing is only really known as the band director but most people don’t know he has four children,” Blasko added.

She said she wants to show other students that teachers and staff have a life just outside of just school.

Blasko stated that sometimes she finds writing or coming up with news stories to be a little challenging. She added that the topics are mostly serious, so she find that it can be difficult to find a subject that people would be interested in.

Hayley Herrin, a sophomore in yearbook, said that the class is always a fun environment. She said, “It is a class where you get to be creative, and have your own ideas.”

“My inspiration for writing is I love writing about all of the events and memories we make throughout the school year. I love seeing the smile it puts on the students’ faces,” Herrin said, “when I got my yearbook at the end of each school year, I remembered how much it put a smile on my face. So, I wanted to be a part of that, and help put together our school memories.”

Herrin talked a little bit about how she prepares for writing and editing by getting all the necessary material she needs to begin writing.

“I like to have everything organized, and ready to go by the time it comes to actually editing the yearbook,” she said.

She said she comes up with the things she writes by remembering it all needs to circle around the theme for the Greenfield yearbook for the year.

Herrin said, “Being in yearbook class has changed my perspective on life so much. Putting the yearbook together has shown me how one picture can really tell a story.”