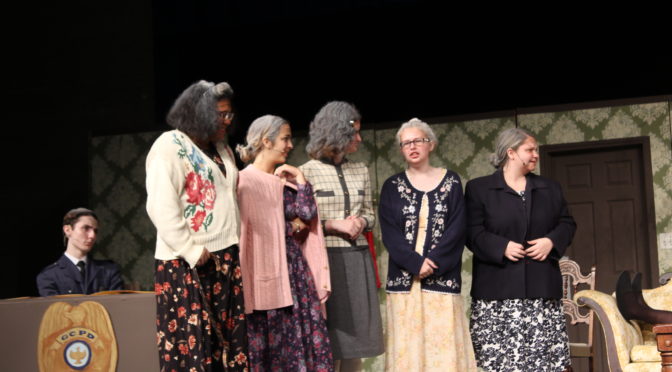 Greenfield Central’s Thespian Troupe 2961 put on a strong show once again at  regionals, which put them in third place and awarded them “Best Set Design.” Their third place at regionals got them to state.

Creating a show for competition is harder than it seems. The cast and tech crew came together and worked hard for months to put together their competition piece Anybody For Tea.

When Jordan Kuker, 10, who was a member of the cast was asked what the cast’s goals were when performing she said, “Our goals were mainly, get our set on and off quickly, do our acting fast but not too fast, and the most important goal of all. Make people laugh. The phrase ‘remember what’s funny’ will probably be ingrained into my brain until the end of time, but those three words are probably what helped me the most.” Some people also set personal goals for themselves like Audrey Roberts, 10. Roberts said, “My goals for this show were to give it my all and have fun. Acting is unpredictable in so many ways. You never know if the tea tray will refuse to go under the table or if you’ll accidentally drop a pencil during Regionals (and yes I know from experience).  With that unpredictability in mind, I knew I just needed to have three things done: all my lines memorized, have created a character that is more than just the lines, but has a motive for why she is who she is, and I needed to be prepared for the little things like dropping a pencil.” And Coy Walden,10, director said, “ Our goal is just to have everything run smoothly, and make the show enjoyable for not only our audience, but for the actors, too.”

Going through the competition process isn’t exactly a breeze either; at regionals they are scored on so many things including how long the play takes to put on, perform, and take down, how well they work together, how good their acting was, and how well the set was made. Before the cast puts on a performance they have things they like to do to prepare. Kuker says, “ For me personally, I have very very bad anxiety, so keeping myself calm is very very important to me. I do deep breathing which is good if you have a mic backstage before a show, I can stay pretty quiet and keep myself distracted. I also carry a fidget toy on me at all times, so before I go backstage I make sure I have time to fiddle with that. I also listen to music as I get my makeup on.”  Roberts said, “The best way for me to deal with before show jitters is to stay occupied. We, the actors, might run through the lines once before going on, but there’s so much wait time we find other things to do. Before state, we were playing games like hangman and “down by the banks!” Walden said, “We have many things we do right before a show. A lot of times we’ll sing and dance to music to just let our jitters go. We also make sure we know we’re all there for each other, we’re prepared, and that we’re a team.”

Being in a club like Thespians brings memories and a second family. Walden said, “The best experience of the show being the director is definitely sitting in the audience and being able to watch everyone’s hard work pay off. The worst experience was probably performing it for the last time. It was bittersweet. We had all grown attached to this show, and were sad to see it go, but it was good to finally put an end to it once and for all.”

Roberts said, “My favorite memory of the show was our first performance at the high school when I started backstage and could hear everyone onstage in character; it was so incredible to hear these old lady voices and the laughter of an engaged audience. Honestly, worst experiences fly away faster than you would think. At the end of a show, we’re all sad to see it go, so the bad moments are often forgotten in favor of all the fun times we had.”

Kuker said, “I think my favorite experience would be getting dinner with my friends at the college campus and then going and seeing a very good show another school had put on. I remember laughing with my friends at lunch and watching that amazing show. The whole thing was truly an amazing experience which I think will change the way I act for the better. I don’t think there was anything that I really hated. I guess if I had to choose one thing it would be when we had trouble getting to the school during heavy snow. It was a little scary but our bus driver was very very skilled and nice.”