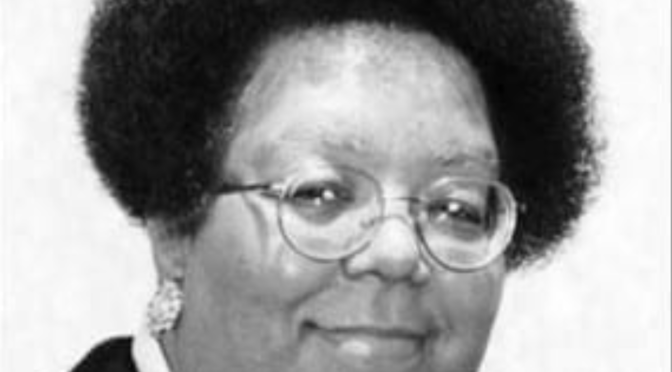 A future full of outstanding achievements and breakthroughs was unknowingly made on June 29, 1943 with the birth of Indiana’s first African American female Superior Court Judge, Zilthia Mae Perkins Jimison. Jimison’s life would be a canvas for equality and change. Her voice and attitude would be the light for many then and now.

At an early age Jimison had developed her beliefs and knew what she wanted to fight for. She wasn’t going to let anything stand in her way. Jimison’s parents didn’t believe in limitations and continued to reinforce that idea. Jimison believed that anything she put her mind to she could accomplish. This mindset would prove to be good for Jimison, as at many points in her life she would smash ceilings.

In 1963, Jimison would graduate from high school and enter Indiana Central Business college. While working towards her degree she would be working at Apex Finance Center. During this time Jimison would marry the love of her life Robert M. Jimison, Sr, a Union that would go on to last for 43 years. After graduating from business school Mae wanted to further her education, so both her and her husband entered Indiana State University.

Jimison’s time at ISU is nothing short of special. Her leadership skills would prove to help provide and maintain a cultural for African Americans at ISU. Jimison was active in the Black Student Union, first as a member and then as the prime minister in 1972. Jimison’s biggest accomplishment as prime minister was her fight to realize the Afro American Cultural Center. Through her leadership and no nonsense attitude she was able to convince the President of the urgency of the AACC.

In the years following her time at ISU, Jimison would go on to pass the Indiana Bar in 1977 and went into private practice. Jimison would soon rise up the ranks and emerge as an expectational trial attorney. Years later, Jimison served on the Indianapolis City-Council from 1992-1995, with the spirit of giving back to her community. Then in 1995, she took a massive stride and became a mayoral candidate in Indianapolis. Running as a Democrat candidate against Stephen Goldsmith. Jimison was the first African American to win an Indianapolis mayoral primary. Even though Jimison fell short of the required votes for victory, she triumphed in the ways of history, with her stellar campaign, her candidacy would pave the way for future African American mayoral candidates in the city.

In 1988, Jimison was appointed as superior court judge by Republican Governor Robert D. Orr, becoming the first black woman to serve as a judge on the Marion Superior Court. She served admirably from 1988 to 1990. Then in 1996, in a historic election, Jimison was elected to the Marion Superior Court bench and served for six years. This extraordinary achievement would pave the way for other women to enter judiciary in Indiana.

Jimison would be recognized for her outstanding efforts through awards. She would be rewarded with The Distinguished Alumni Award from Indiana State University and the State of Indiana Sagamore of the Wabash Awarded presented to her by former Governor Joe Kernan.

Jimison’s ceiling smashing achievements opened up the door for all those that followed her. Jimison is pioneer, her story deserves to be shared. Jimison was taught to not believe in limitations. If there were limitations, she ignored them. She made her own rules.