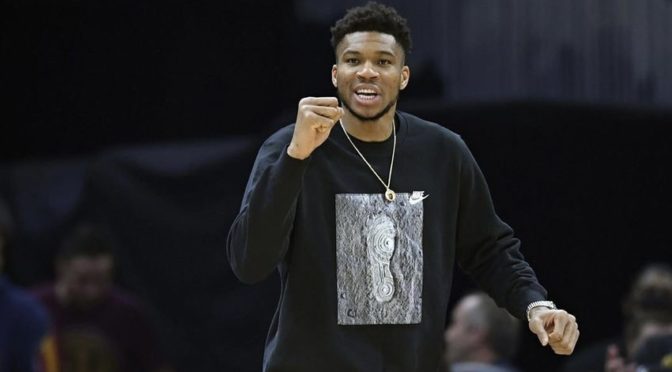 DNP is an abbreviation used in the National Basketball Association to indicate that the player it is listed with did not play in the game.

Photo Caption: Milwaukee Bucks superstar Giannis Antetokounmpo cheers from the bench. Antetokounmpo sat out Sunday’s game, along with the rest of Milwaukee’s starters, against the Cleveland Cavaliers, with the Bucks losing 133-115. DAVID DERMER/AP PHOTO

It was an anti-climatic final day in the National Basketball Association this past Sunday, despite the fifteen-game slate that took up the entire afternoon, including interesting match-ups between key playoff teams such as the Milwaukee Bucks and Cleveland Cavaliers, the Boston Celtics and Memphis Grizzlies, and the Chicago Bulls and Minnesota Timberwolves. But, the main story of the night ended up being the fact that most of these teams sat their best players and sold on the game. It relates to a much larger debate that surrounds the NBA about load-management (load-management, to clarify, is a recently coined term that essentially means “planned rest” that players often use to avoid back-to-backs and to keep them play-off ready) and star players missing games and “ruining the product.” To be fair to those who argue that, a night like Sunday is a perfect example of how load-management and sitting star players can ruin what would otherwise be an incredible end to the season; the Celtics and Grizzlies game was run on TNT, with the Grizzlies sitting their entire starting five (with exception to Ja Morant who is still recovering from an injury).

This does not exactly represent the league in the best light to the casual viewer. But, to be fair to the teams and players who make the decision to sit out, the Dallas Mavericks and San Antonio Spurs game that same Sunday night explains exactly why they choose to sit. In a meaningless game that would not affect seeding or play-in tournament contention, Luke Doncic (the Dallas Mavericks’ only all-star and an MVP candidate this year) played in the game and suffered a calf-strain that could likely put him out of the first round of the playoffs. Had he sat out, he likely would have avoided the injury and been well-rested and prepared for the Mavs’ first round matchup against the Utah Jazz. There has been much debate about whether to shorten the regular season or not for some time, with some suggesting shortening the season by ten or twelve games.

Some have suggested much more radical changes to not only the regular season, but the playoffs. Daryl Morey, President of Basketball Operations for the Philadelphia 76ers, suggests shortening the regular season to fifty-eight games. “I like fifty-eight,” explained Morey on the Colin Cowherd Podcast, further dictating, “Every team plays every other team two times.” Morey has an even grander vision for the playoffs, stating, “Shorter is better. I would have it one-and-done. There’s a reason everyone tunes into every game at huge ratings in the NFL. It is literally one-and-done.” Compared to the current playoff system, that is quite a shift, and in my opinion, a shift in the wrong direction. Part of the appeal of the NBA playoffs is the seven-game series, which sees coaches and players making shifts over the course of the series and adapting to each other in a sort of chess match between the teams.

I’m not sure shortening the season is a move in the right direction either, especially when it’s only by ten or twelve games. There are still going to be back-to-backs, there is still going to be load management, and there are still going to be nationally televised games where the all-stars are on the bench. It just happens. Teams value their superstars in the long-term much more than they value the ratings of a couple TNT or ESPN games, and I do not think they are wrong for doing so. It’s like a nice pair of all-white shoes: you only wear them occasionally, you don’t wear them when it’s muddy out, you don’t slip them on to go take out the trash, you constantly check if they have marks or stains, and you’re constantly worrying about them while you’re wearing them. Yes, it would be awesome if you could wear them all the time, but are they going to last that long if you do? Probably not.

It’s funny to think about. People look back at the careers of Penny Hardaway and Tracy McGrady and remark how tragic it was that their careers ended so quickly, and then turn around and call the players of today soft for sitting out of games or taking a long time to recover from injury. Hardaway played nearly every game of his career, playoffs included, before his knee blew out in the 1996-97 season. Maybe his career could have been lengthened had load management been a part of the league back then and had the Orlando Magic front office and medical staff been as protective over him as teams are over their superstars nowadays. Maybe it would have been the same, we don’t know. The point is the NBA has some of the most advanced and intelligent medical minds in the world, working constantly to maximize the league’s premier stars’ longevity, athleticism, and health. So, when they sit out a bunch of the starters on a nationally televised game, sometimes it’s just like those all-white shoes: it’s better to keep them in the box for mundane days so that you can wear them to special occasions for a long time.