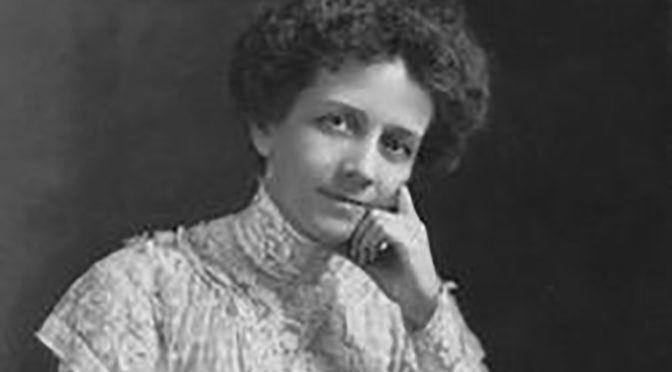 The Progressive Era, from the 1890s to the 1920s, was an era of intense social and political reform aimed at making progress towards a better society. During this era issues such as labor rights, women’s suffrage, economic reform, environmental protections, public housing reform, and the welfare of the poor were all addressed. Indiana had its own reformer, someone who wanted to better the spaces people lived in, a woman who would become Indiana’s Municipal Housekeeper: Albion Fellows Bacon.

Bacon was an American reformer and writer. She’s largely remembered for her efforts to improve public housing standards. Bacon was very involved in tenement reform and was vital in the passage of legislation to improve housing conditions in Indiana in 1909, 1913, and 1917.

Bacon was born on April 8, 1865, in Evansville Indiana. She was the youngest daughter of Reverend Albion Fellows and Mary Fellows and a younger sister to writer Annie Fellows Johnston.

After the passing of Bacon’s father a few weeks before her birth, Albion’s mother Mary returned to her hometown of McCutchanville, Indiana. Bacon would attribute her early life in a small, rural town as her motivation for her efforts to achieve urban reform.

Bacon would go on to graduate from Evansville High School in 1883, she would then work for her sister, Annie Fellows Johnston, who would become a professional writer, as her secretary during her tour in Europe.

On October 11, 1888, Bacon would marry Hillary Bacon, the owner of Woolworth’s shop in Evansville. The couple would have four children together.

At the turn of the century, Bacon would become very concerned about the effects of industrialization and urbanization. Her main interest was improving living conditions in Evansville. Bacon then became active in her community; she volunteered as a “friendly visitor” for local charities. She helped organize a Flower Mission group, which donated and distributed flowers to poor working girls.  She formed an Anti-Tuberculosis League that would help with preventing the development of tuberculosis, and also a Working Girls’ Association, that helped young women that were working in factories and mills. The association would later affiliate itself with the YWCA (Young Women’s Christian Association) in Evansville. Bacon was also a part of the Monday Night Club, a group of influential individuals interested in charitable work, her focus being its housing committee.

Bacon showed her dedication and determination to achieve her goals by attending every session of the Indiana General Assembly from 1909 and 1917 due to her agreement with the Indianapolis Commercial Club. The Indianapolis Commercial Club would sponsor her legislation if she attended sessions of the Indiana General Assembly. During her time attending these assemblies, Bacon would garnish support for her legislation from other groups.

Even after achieving her primary goal of establishing a state-wide  law, Bacon would continue working as a social welfare activist. In 1917 she became chair of the Child Welfare Committee, a part of the Women’s Section of the Indiana State Council of Defense. She would then work on the passage of school attendance laws and establish a juvenile probation system.

Bacon would die of heart failure on December 10, 1933, at her home in Evansville. She is praised as a symbol of the housing reform movement and Evansville’s best known and most loved woman.