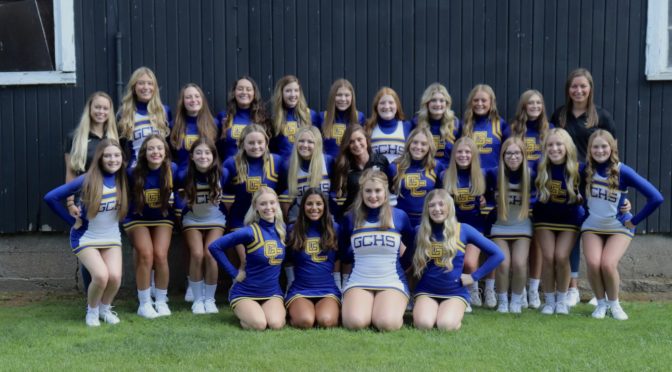 Photo Caption: These are the 2022-2023 cheerleaders, ready to start the new season.

Motivating, character building, challenging, these are the words Coach Christy Carey gave to describe her coaching style. She has been cheering for years; she cheered at her high school and middle school.  She also has cheered at regional, national and world levels. After that she cheered at the collegiate level at Purdue University. This is her fourth school for coaching and she is still an active cheerleader today. Safe to say she is pretty qualified.

Cheering made her who she is; she loves teaching the next generation of young cheerleaders. She loves challenging young student athletes. “Greenfield Central seemed like a special place to grow the legacy of Cougar cheerleading,” she said. Coach Carey wants to take the cheer program into the better light. She said, “Cheerleaders are often given a bad reputation even though it might not be deserved.” She wants to build a community; one of her goals is to get the cheerleaders into the community around us while building a community in the cheer program.

“Coaches I have had in the past are my driving force to be the best coach I can be,” Coach Carey strives everyday to be the best coach she can be. “I think I was surprised at how welcomed I was, how excited the girls were and the parents and staff”.  After the last basketball season everything was up in the air for the cheerleading program and having someone who came in and completely flipped it was new and exciting not only for the cheerleaders but the parents too. This being Coach Carey’s 4th school she was ready to take on the Cougar cheerleading program.  And every cheerleader or parent was ready for the ride.

“I love my girls so much,” Carey stated. When asked what she loves the most about her cheerleaders she says “I loved how hard we worked for 3 months with a rocky start and everyone buying into my vision and my mission”. She was hired right before summer, not much time to plan or organize everything. In cheerleading you need time to prepare and plan and she wasn’t given much time at all and was hired by herself. She did get one coach hired just in time for summer, Coach Logan.

Coach Logan Gruell is a third generation Greenfield grad, and cheered all throughout high school. “Coach Carey and I have similar coaching styles, which makes us such a great team. I am really enjoying getting to learn from Coach Carey with the experience that she has.” Coach Logan and Coach Carey have very similar goals for the team. Which makes the cheerleading team run even smoother.

Coach Hanna Collins is the head JV coach, she was also a cheerleader at GCHS. She was offered a position from Coach Logan. “I really wanted to be back involved with cheer at the school I graduated from.” This is her first coaching high school level cheerleaders. She also had noticed some changes then vs now. “The only differences I have noticed are the closeness of the team mates. It seems like everyone is friends with someone from the opposite like JV is friends with some on varsity or vice versa”. Not only is this a great thing, but it also gives the JV team someone to look up to. Coach Collins will do great things not only for the program as a whole but progress the JV team in any way she can.

Coach Carey is not only influential on cheerleaders but coaches too. “Given that I had not had previous experience coaching high school aged kids I wanted to take on her style and build my own style off of hers” says JV head coach Collins. Coach Carey alongside her other coaches has really made a space for cheerleaders to really succeed, “I think she has already changed the program for the better, she’s given us a cheer family where we all feel at home” sophomore and 2nd year varsity member Maddi Bowman states.

The cheerleading program has gone through so much change in the past years but Coach Carey is hopefully a great and last change for a while. Coach Carey has really made a space where cheerleaders can just be cheerleaders. That is a something that not only was needed but long awaited and just in time for the seniors last year.