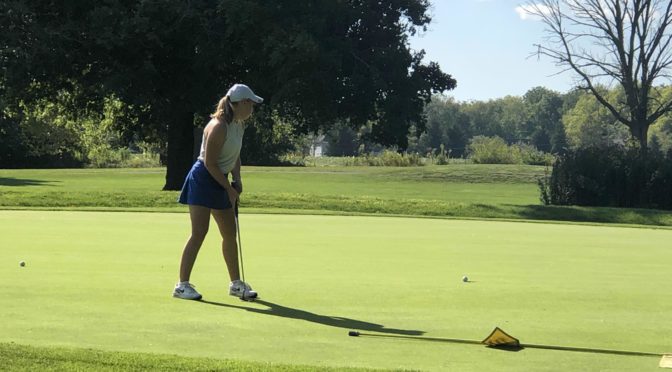 Photo Caption: Sydnie Wherry, 12, finishes up a hole at the county meet on August 30. The girls placed third at this event.

The girls golf team is one of the most successful sports for Greenfield Central with many accomplishments. With this year speeding up, the girls golf coach and two of their most valuable players answered some questions. So far the team is 1-1-1. Russell Wiley, the golf coach, is a teacher who has been teaching for 15 years at Greenfield Central. He has also coached the girls golf team for 11 years and the boys golf team for 7. “Learning the importance of hard work, building skills, work ethic, and being able to get through something difficult since golf is such a skilled sport,” said Coach Russel Wiley when asked what he wanted his team to get out of being on the golf team.

Coach Wiley is always on sight to improve his team any way he can. Some of his goals this year is to “finish better than we started — looking back at our first scores and see how much we improved. Also to make it to regionals is always one of our top goals.”   Coach Wiley doesn’t feel pressure, but when the girls do, he likes to ease the pressure and talk them through and make sure they don’t mess up.

Sydnie Wherry, 12, one of Greenfield’s most valuable players, has been on a roll. With a great match just a week ago, she shot a 39. Whenever she is under pressure, she likes to “take deep breaths and don’t stress over a ball.”  She talks about what she likes most about being on the team. “The girls. They can definitely be a lot, but a special group of people. They are some of the best people to be around, when they don’t stress me out.”

Wherry has golfed since she was small, but started playing competitively since seventh grade. She enjoys going to Grandview Golf course once a month with her family. She also likes Hawks Tail. “I love Hawks Tail, mainly because I practice there a lot and go on my off days. I just know the course by heart.” Wherry offered some helpful words of advice to other golf players. “It is harder to keep composure than stress out and throw a tantrum. Never stress over one ball because if you stay angry at one ball, from there to the next shot or hole, you’re going to fall apart.”

Ella Neil, 11, another player on the golf team, enjoys being on the team and getting so close with the girls. She golfs almost every day besides Saturday. She golfs with the team all week, then golfs solo on Sundays. “On days I don’t have required practice, I like to go alone and practice difficult shots or just play a fun 9,” said Neil when asked what she likes to do on off days.  This shows how much work she puts into this sport. Neil loves her 7-iron and her driver; those are her go-to clubs. Neil ended the interview with some more advice for golf players. “Don’t get discouraged, even if you hit a bad shot. Just keep going. It’s not the end of the world,” she said.