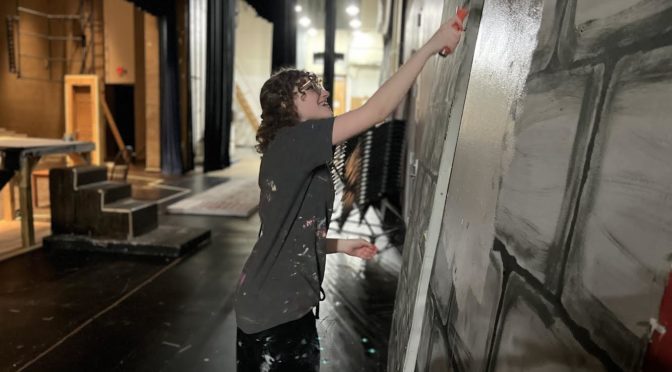 Photo Caption: Addie Coombs, 12, paints a wall for You Can’t Take It With You.

Addie Coombs, 12, has been the tech head of the paint crew for the drama department since her sophomore year, given the position suddenly after the cancellation of GC Drama’s 2020 spring musical, Footloose, during her freshman year. Despite the abrupt change, Coombs said she isn’t complaining; being tech head has been super fun for her.

When Coombs started high school in August 2019, she said she didn’t know what to expect at first. “I don’t remember everything, but I think I was way more nervous for high school than I was excited.” Coombs said. She also remarks on why she decided to join theater her freshman year. “I really wanted to be involved in something, since I heard so many teachers tell me to get involved in things or else my high school career would be really boring.”

One of Coombs’ best friends since the 7th grade, Abby Morgan, 12, is also involved in the drama department as part of the paint crew to help paint the set in productions. When asked her best moments in theater with Coombs, she said, “One of my best moments with Addie in theater would be my first show, Cheaper by the Dozen. Our paint head at the time would always put us together on jobs and we’d always laugh together.” Morgan also says that she’s learned a lot of things from Coombs, including how to be more kind to herself and others around her. “She’s always been the nicest person I’ve ever known, and I’d like to think some of it has rubbed off on me.”

Carolyn Voigt, an English teacher and drama director at GC, has worked with Coombs during shows as well. Voigt describes her as passionate and a kind leader, having the ability to lead a group without being authoritative during shows. “Addie meets deadlines, and communicates and delegates tasks to her team well,” Voigt mentioned while commenting on Coombs’ leadership qualities. Voigt mentioned several reasons why Coombs was okayed to become a tech head for the program. “Addie always asked what she could do to help the production, even if it was extra work. She showed initiative, and she got along well with others. She was/is dependable.”

For her last season of shows in the drama department, Coombs is looking forward to many things with her crew. “I’ve always loved hanging out with my crew and spending hours upon hours with them, especially during tech weeks when we don’t have much to do other than talk with each other and enjoy each other’s company. So I’m really looking forward to the final few times I get to do that!”

Now as a senior, Coombs said, “Being a senior is so incredibly weird.  Obviously it’s really nice because I know the rounds of the school, teachers aren’t as cautious/strict, things like that. One of the main things I’ve noticed is that the fear and self consciousness you feel when you start out as an underclassman is completely gone.” When asked what advice Coombs would give to younger students, she said “My advice is to try and make friends! Don’t stick to just one or two people, try and branch out and really throw yourself out there. Being in high school is so much more fun when you have people by your side who you enjoy talking to.”