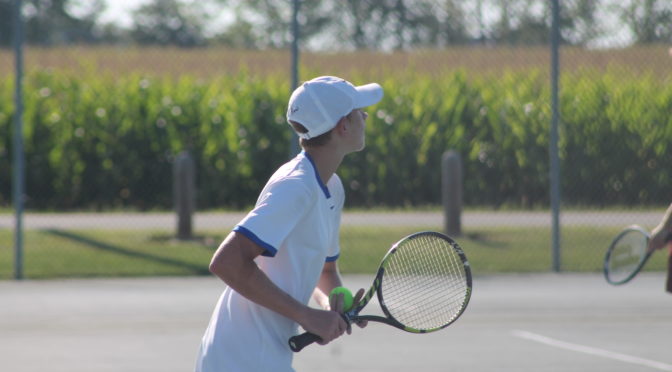 The GC men’s tennis team is nearing the halfway point of their season. There are three meets left before county and nine meets before sectionals. They have already made a mark on the season with an 8-1 record.

Greenfield Central junior Caden Robertson has helped the team push to achieve this record. “I think we are doing very well,” Robertson stated. “We are performing above expectations.” The tennis team’s record last year was 13-4. With an 8-1 record this season they are looking to beat last year’s record and maybe even win county. They have even beaten multiple teams that they fell to last season.

Delta High School was a team that beat the tennis players last year. The Cougars suffered a heartbreaking 4-1 defeat with only one of the doubles’ teams winning. This year the tables have turned. Greenfield Central powered through to beat Delta for the first time in GC men’s tennis History. The score was 3-2 with a singles sweep. Junior Chris Long was one of these singles’ players. Long accredits this success to the coaching staff. “Over the off-season we have all worked hard and gotten better thanks to Coach (Michael) Turpin’s advice and Coach Lawhorn’s great coaching,” Long stated.

Junior CJ Michalek is undefeated going into this last week before county. “It took hours of very hard work to come this far,” Michalek responded. “All the effort I put into getting better has really helped me this season.”

Robertson’s goals this season are to win sectionals and county. This seems to be a common goal among GC mens tennis players. Long said, “I hope we can win county or sectionals this year.” Long thinks this is a very real possibility because they are having the best season he has been a part of according to him. Robertson believes Mt. Vernon or New Palestine may be the toughest opponents in the county tournament. With an 8-1 record all seems possible to these Cougars.