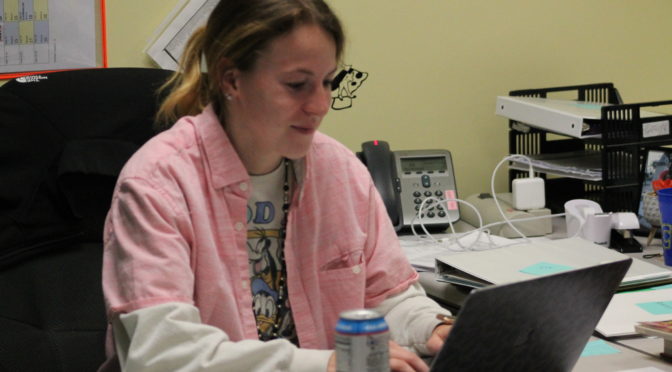 GCHS’s newest FACS teacher Mikayla Bowman is a former GC graduate who just became a certified teacher at the start of this school year. When she was a student at GC she took every FACS class she could, and in fact she currently works with many of her old FACS teachers. Ms. Bowman has only been teaching for a month, but she is already being described as “fantastic” by fellow FACS teacher Mrs. Sandy Powell. But there is much more to Ms. Bowman than what meets the eye.

Ms. Bowman’s mom was a teacher, so she spent much of her childhood in classrooms, and has always been enthusiastic about teaching. “I always wanted to help around the classroom or grade papers,” Bowman stated. Mrs. Bowman coaches the GCHS dance team, and has been coaching since before she became a teacher, so she’s always been active in GC schools.

Ms. Bowman graduated from GCHS in 2017. When asked what made her decide to come back to GC schools as a teacher, Bowman asked, “Why wouldn’t a teacher want to teach at the same school they graduated from?” She described how amazing it is to be working in the exact classroom she fell in love with FACS in.

Ms. Bowman puts amazing amounts of effort into her job even having only been here for a few weeks. Mrs. Powell, a fellow FACS teacher, complimented her by describing her with terms like passionate, creative, and intelligent. She is well liked by her students, with many naming her their favorite teacher even having only known her for a few weeks. “When some of my students were asked what class they looked forward to the most, many of them said my FACS class,” Ms. Bowman said.

Bowman is already known throughout the student body for her fun and energetic way of teaching. She always manages to keep class interesting and fun, while still making sure students are able to learn all that they need to be successful in her class.