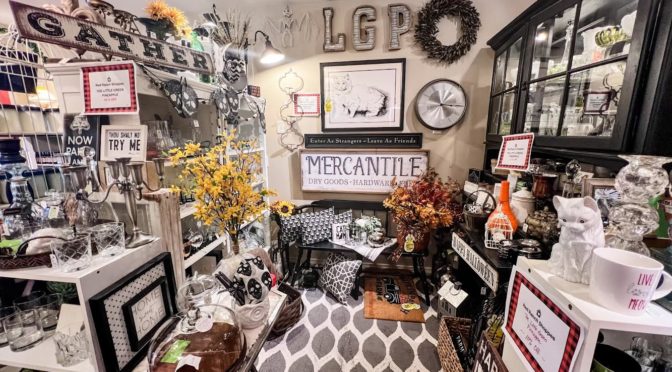 Four years ago, on October 1st, 2018, GCHS English 9 teacher Jennifer Holzhausen opened a booth for arts and crafts.“I enjoy selling things,” she says. “But related to that, I like finding things that people are looking for, and are excited to find.” Her booth demonstrates her passion. “I enjoy making something new out of something that was old,” says Holzhausen, “and taking materials that potentially were donated or discarded and making them beautiful in a completely different way.”

For Holzhausen the crafts began when she was young. “I used to do a lot of cross stitching and I made crafts with my mom and I made things in Girl Scouts and in art classes,” she says, “I had an art scholarship because I took a lot of art classes in high school.” She spent a lot of time doing crafts with her dad. “We sort of blended our talents together to create some cheese plates and cake plates or domes that I had found and so it started with that, honestly,” she explains.

Arts and crafts have always come easily to Holzhausen. “I’ve always been a creative person, and I’ve always had an artistic side,” she says, “I just haven’t had a whole lot of opportunities to explore that; but I really think that I get my creativity and my artistic skills from my dad. He’s very hands on, and he’s a builder and a maker, and I think that’s where I get it.”

A lot of her inspiration comes from simple tutorials. “I did watch a lot of YouTube videos to kind of get a sense of how these things are built, and how I can do it better,” says Holzhausen, “I took what I learned from those and I made it more complicated, but I feel like I made it more special and unique, and added my own twist to everything.”

This can be seen with the broomsticks Holzhausen is making for Halloween. So far, she has made 52. The brooms are made from curtain rods and a variety of other repurposed items. Each of them have been given names, some simply based on the personality of the broomstick, and others after well-known people, both real and fiction. According to Ms. Holzhausen, “Some are named after literary and movie or TV witches or villains (Samantha, Tabitha, Winifred, Evanora, Hermione, Cruella).” Each of them are unique in specific ways, including the types of belts and handles each of them have, that give them personality. “I’m loving these broomsticks,” Holzhausen says, smiling, “I have had more fun doing this than probably anything else in the last twenty-five years. I’m super passionate about it. I’ve really enjoyed the creative outlet.”

Holzhausen already has future plans for her business. “Eventually I hope to make this my retirement job,” she explains, “and I wanted to start early so that I could have something that was already well established by the time I do retire, and I wasn’t starting from ground zero. This month has been the best month I’ve ever had in terms of my sales and so it gives me a lot of hope and encouragement that this can be a really decent income in the next nine years.”

There are challenges that also come with having a booth, though. “The challenges for me are that I am only one person,” says Holzhausen, “and so a lot of what I do requires some heavy lifting and moving of furniture. It’s difficult for me because I’m muscling a lot of that myself.” She goes on to say that even with that, it’s far more rewarding than challenging.

As for her teaching, Holzhausen says that having a side business complements it more than anything. “It gives me another creative outlet,” she says “I think that it helps me think outside the box a little bit more, and it helps me to inspire my students to be able to do things that are not necessarily on the college track. If students want to start their own businesses or pursue being an entrepreneur, that is something that I can help them with.”

Holzhausen continues with advice for someone who wants to start their own booth. “I would say start it as soon as possible,” she says, “and be prepared to learn quickly what sells and what doesn’t sell, and the most important thing is to find the right price point for the people that you’re trying to target.” For her, this means understanding what her customers want and using that to create new things. “For the most part,” Holzhausen says, “I think my inspiration comes from my customers and what they’re looking for, which is something different, something they’ve never seen before.”