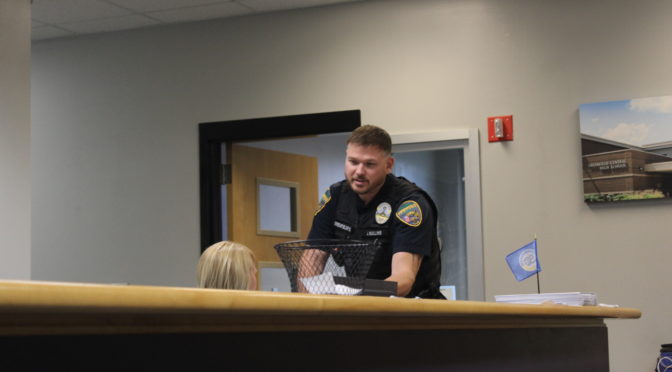 One of the overlooked an perhaps underestimated staff member of GC is the Resource Officer. Officer Josh Mullins is one of Greenfield Central’s main resource officers. He is well liked by staff, students, and the administration alike.

Principal Jason Cary, when asked what he thought Officer Mullins’ greatest quality was, he said, “His personality. He is very easy to talk to, he is very relatable, and he has great relationships with kids. Officer Mullins does a great job of using his common sense and working with us and our kids. He treats them with respect, but they also know he is here to keep us safe.”

Cary also stated, “He takes his job keeping us safe very seriously, but he is very easy to get along with and work with. He is an integral part of our team, and we are happy to have him here every day.”

Officer Mullins, who became a police officer in 2009, always wanted to help people out. “I would say that is a really cliché answer, but it was more that when a certain person from the community relies on you it makes you feel good inside. I come to work everyday thinking how can I impact my community and school.”

Mullins, when asked what the best part of his job at GC being a police officer was, stated, “I would say connecting with the students. I think a lot of the time police officers are misunderstood on who or what we are. Yes, we do take people to jail, (sometimes,) but we are human and people just like you. So giving advice to students to help them in situations outside of school  to maybe prevent them from getting into trouble or just helping with general  questions. I also coach basketball here at GC, so being arounds the athletes at another level lets them know I am more than a police officer and not always here trying or looking to get the kids in trouble.”

Officer Mullins’ advice to teenagers wanting to go into his profession is to first, know that being a police officer’s job is not for everyone, and it requires a certain personality. Second, shadow an officer and see what they do, what they deal with, and how they deal with it. Third, realize there it is a good thing to be an officer, but there is some negativity to it, so be prepared for both.

Mullins wanted to become a basketball player, until a major injury unfortunately ended it. Another occupation other than a police officer that he considered was a veterinarian. However, he didn’t really understand how much time and studying was needed to become one.

Finally, when asked who his hero was, he said his father. “Definitely my dad. He passed away 5 years ago. He set standards for me when I  was a child that I try to instill into my kids to this day. My father always told me that if you want something in life, you have to go take it. He told me nothing is given and have to work your tail off if you want to succeed. My dad showed what it was like to actually be a father and take care of your family, that family comes first no matter what!”