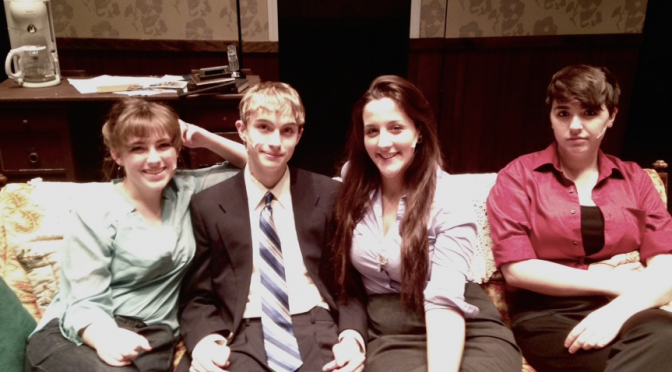 The drama club had a special event on Jan. 23 and they put in all their effort to get prepared for it. A play called Home by Ross McMichael, 12, placed second in regionals with a perfect score made it to state competition. Home is about a woman named Ella Delano who mentally abuses her children and lies to all her friends and family about having cancer and ends up running away with the man she fell in love with. This competition is something that the drama club has been working hard for and are very excited that they finally made it. Even though they’ve made it to state, they still have to practice and focus every minute on improving the weak spots.

“We need to work on our timing and staging a little bit. Our timing was what threw us off at regionals. We didn’t meet the time limit, so we have to work on our timing. That’s all I’m worried about. It’s just something to improve and work on, but we will get the hang of it,” Ross McMichael, 12.

Working on improvements is the main goal especially when getting prepared for a huge event like a state competition. Everyone should be working up to their absolute best and making sure that they all work together.

“As the director, I was allowed to cherry pick my actors and pick the best people in that program. They have worked on absolutely pouring their entirety into this and we walked away with three acting awards and two technical awards so yes I would say they have poured themselves into this,” said McMichael.

“Yes, I believe that we have been working to our maximum. We have all been working really hard, because we have advanced this far and we want to give it our best shot at the competition,” Harrison, actor, 12.

Confidence is a key word in drama. Some actors get nervous and freeze up while others stand up on stage proudly and enjoy what they’re doing.

“All my actors and staff seem pretty confident and that’s why I picked the best people. I chosed the people that were confident and were willing to give it their all one hundred percent. I was also able to pick the production people and I put the best ones in it,” said  McMichael

Another thing to have confidence in is placing in the competition. Having faith in your staff and knowing that you all did your best and put yourself in the entire performance.

“I don’t know if we will win, but I know that we will place. The judging at state is far different than what it was at regionals for some reason. The judges base the best productions on categories like scariest play and most dramatic play and I think we have a good chance at going to national competition, because I think that we will place in the play that best represents the state,”said McMichael.

Having fun is the main part of the competition. It wouldn’t be fun without enjoying what you’re doing and having something to look forward to once you get there.

“I’m just looking forward to the different environment, meeting new people, and connecting to everyone to a way where we are similar one way or the other,” Harrison.