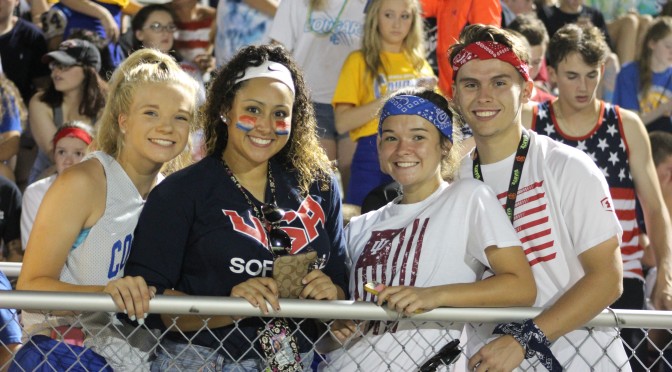 With a recent loss to Mt. Vernon looming over them (10 – 27), the GCHS varsity football team sought an annihilation of Pendleton Heights for Homecoming on Friday, Sept. 9.

A hard-hitting loss can knock the confidence out of any athlete. For the Cougars, it was easy to bounce back. Xander Denman, a senior offensive left tackle for the Cougars at #77, said, “I got into last year’s mentality (during the game against Mt. Vernon), which is a losing mentality. To get ready for this game (against Pendleton), I just rested. I recovered. I am refreshed and ready.” Senior tight end at #10, Lee Dullaghan, spoke for the team, “We are just getting our minds right coming from a loss, and mentally preparing.”

In 2015, the GCHS varsity football record was 4 – 6, one of those losses being the Homecoming game. With that in mind, the pressure was mounting as the 2016 Homecoming game neared, and the players were quite aware. Senior right tackle for the Cougars at #60, Aaron Young, said, “The Homecoming game means a lot. We know it’s our chance to showcase all the work we have put in.” Michael Sosnowski, a senior running back for the team at #25, added, “We know it’s going to be very hype. It is going to be loud. A lot of people are going to be there. We can’t let that get to us though; we just have to play our game.”

To ensure a win over the Pendleton Heights Arabians on Friday, the GCHS Cougars spent the week preparing. “We are throwing away the last game, and completely revamping how we are preparing for the next game,” said Denman. Hard work was being put in from all players on all fronts. Sosnowski said, “We just keep constantly running play after play in practice. Defense and offense are doing their thing.”

Before the Homecoming game on Friday, it was quite clear the GCHS varsity team had rebuilt its confidence and was prepared to compete with Pendleton Heights. “I think it will be a good game. They are a good team. But we are hungry for victory, and I think we will pull that win,” Young said.

Key advice was prominent before the game. “Play as hard as you can, as fast as you can, as best as you can,” Dullaghan said. “If we can keep our mentality right, no one can beat us,” Denman said. The GCHS Cougars made sure to be set on the objective, a Homecoming win.

The GCHS Cougars made major moves in the Homecoming game against the Arabians. Key plays included forcing the Arabians to turnover the ball three times.

One mistake from the Arabians at the start of the game set the Cougars off on the right foot. With a high snap from the Arabians, the ball soared over their quarterback’s head, was recovered by the Cougars, and was run for a touchdown by Kyle Morris, 11.

Throughout the game, the Cougars’ defense plowed through the Arabians’ offensive line. Kyle Morris, 11, sacked the Arabian quarterback twice while Ryan Haynes, 12, sacked him once.

In the end, the combination of the major Cougar defensive plays and the momentum of the Cougar offense led to their victory over the Pendleton Heights Arabians. The final score was 31 – 18.

With a Homecoming win under their belts, the GCHS Cougars were lighthearted. Young said, “The team morale was high. Coming off a loss, we were looking for a big win, and we got it.” Denman said, “After we won the game, it was a really special moment for the football team. It was a good feeling to know that all of our hard work had finally paid off.” The GCHS Cougar win against the Arabians pushed their record to a satisfying 3 – 1.

As for the future, the GCHS Cougars are optimistic and determined. “The only team that can beat Greenfield is Greenfield. No one else can stop us. If we can keep our mentality right, no one can beat us,” said Denman. The GCHS Cougars believe the homecoming win against the PH Arabians will set the tone for the rest of their 2016 season. Sosnowski said, “We have a lot to prove. Being able to beat a team like this, it was a big step for the program.” Denman said, “By winning this game against Pendleton, we put a stop to the doubters and restored the faith of the Cougar fans.”

With a hyped student section and a new attitude, it can be agreed that the outlook for the GCHS Cougars is bright. Their determination and mindset are positives. As Denman said, “One play at a time, one game at a time.”