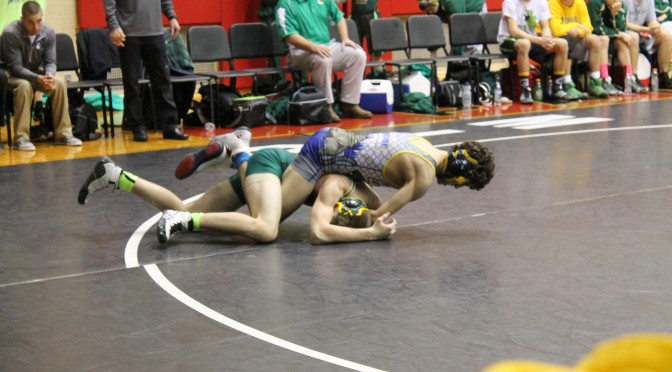 Winter sports are finally here, which means wrestling is back in season! The boys have been working hard in the weight room since the fall and with their first meet on Nov. 19, they get put to the test. The team has set new goals for themselves and have been working on getting stronger.

Carter Noehre made it all the way to semi-state last season and his goal isn’t just to go further.

“My goal is to make it past semi-state. I was there last year and to get further, I got to get stronger and have my mind set on working harder,” said Carter Noehre, 11.

Even the coaches have set goals for their team. “My goal for this team is to get stronger and do their best. Their best is all you can ask for,” said Coach Josh Holden.

A new team also calls for new members. It may be hard developing to a new environment with new people, but according to some of the freshman wrestlers, they have been welcomed to the team as if they were already teammates.

Here is a freshman’s perspective on how they have been welcomed to the team. “I love how they push you and just the atmosphere of the team feels right. It’s good to be surrounded by people who get along with you right off the bat,” said Cooper Noehre, 9.

It is important for teammates to get along and have a good chemistry between them, but it is also important for a coach to notice it too. “It’s so nice to see a team with no drama or beef. I don’t know what goes on outside of practice, but it’s good to see that once they step on the mat, it all goes away,” said Holden.

So far in the season, G-C has placed second in the Elwood Elite 8 Varsity Invitational, falling to Shenandoah in the championship match. G-C also collected a loss against Pendleton Heights 44-18. Upcoming matches include the Western Boone Varsity Duals and a match against Warren Central.