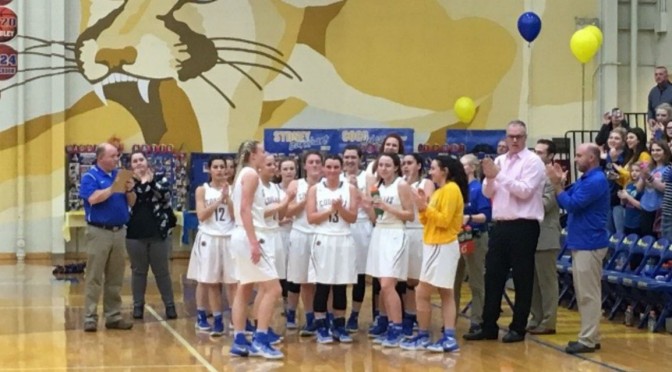 The G-C’s women’s basketball team has been playing hard this season against different, tougher teams around Indiana, even some out of state, but Jan. 14 was not any normal game.

Every year, the girls host a game dedicated to cancer survivors and those that are battling through the illness. The girls gathered around the court, while Mr. Oliver read poems about how hard the battle is to defeat cancer. After the reading of the heart-warming stanzas were over, cancer survivors and fighters stood up from their spot on the bleachers while the girls gave each of them a flower to show their appreciation towards their effort of defeating the disease.

“This is my favorite game to host not just for the girls, but for the real fighters that deserve recognitions and appreciation,” said Doug Laker, women’s basketball coach.

For some players, this is their first experience being a part of cancer night and the feelings they received made them realize how important it is to give back and remorse the ones that weren’t as lucky as them.

“I’ve been to a couple of the past cancer nights to watch my older sister play, but actually being a part of it just gives me the feeling of wanting to give back, because they’ve been through a journey of pain and suffering that they couldn’t control,” Hannah Ferrell, 9.

The team also celebrated a huge win from the Hall of Fame tournament that was hosted in Connorsville. There were teams from all over the country, but nothing stopped the Lady Cougars from coming out on top.

“Plainfield was definitely our biggest competition there. We played them in Regionals last season and it was a close game, but the girls pushed through the pressure and got the win,” said Madison Wise, 12.

“There were a couple times where we had to call a time-out and have everybody settle down and focus on the play instead of focusing on the scoreboard,” said Katie Helgason, 12.

Along with the team’s success, Madison Wise has hit her 2000th career point against the Yorktown Tigers on January 24, which was a very special event, but not from just her breaking her record. That Tuesday was senior night for women’s basketball where the senior players get to play their last home game of their high school career.

“After I hit my 1000 point, I wanted to hit another thousand, and what a better way to do that than on my senior night? It was an amazing night,” said Wise.

The girls will be playing Richmond on Jan. 31 as their first round of sectionals at home.