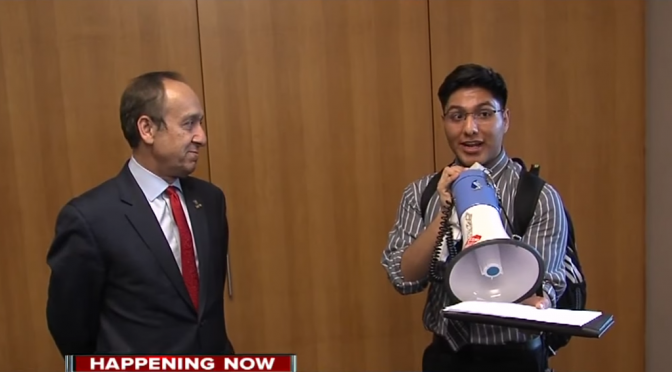 Hector Morales, an IUPUI student from Greenfield, became alarmed at the remarks that Donald Trump had made about minorities during the 2016 Presidential campaign.

Morales organized a walkout in his college and gathered a large following of students to walk alongside him. He told people to spread the word by using #SanctuaryCampus on Twitter. Many other schools were participating, too. It was not his idea, but he organized it in his campus.

President Donald Trump has been known to make controversial comments towards minorities. The movement was made to make IUPUI a Sanctuary, or a safe place for immigrants, LGBT, people of color, or any minority. It ensured that students will be more open and accepting and to protect immigrants from major changes that Trump might make to the DACA Act, Consideration for the Deferred Action for Childhood Arrivals. The DACA Act gives immigrated minors a chance for a work permit and protection from deportation.

Hector lives like any college student; he works, pays bills, and he works again. His actions, however, separate him from the norm. He organized and planned the walkout alongside other major campuses.

He went online and made a Google Forum and asked people to sign up for the walk out using #SanctuaryCampus. Only about a hundred or so people signed up, but once he got to the campus over 400 students arrived. The walkout reached their goal and they got to talk to the Chancellor to help make changes to benefit students.

The walkout was to increase awareness to stop discrimination, but mostly it was to help immigrants. After the walkout, the university responded, saying administrators would closely monitor actions taken regarding the DACA Act and any proposed changes to the policy. Hector described the movement, saying “Basically, it was more about a statement to tell the President that America is a diverse country, and any rule- any bill that anyone tries to discredit that America is a diverse country, we are going to fight.”

This movement had a huge impact, according to Morales.  “That day over 42 universities became sanctuary campuses. We were nationally all over the news,” he said. Yale and Harvard were also a part of the Sanctuary Campus movement, along with several other schools.

This, of course, got a lot of exposure. “Even Bill O’Reilly ( a Fox News personality) was talking about it.” Morales said. “Over 136 campuses were involved. This is considered one of the biggest walkouts that we have seen in the 21st century as far as university walkouts is concerned.”
Morales was the face of the walkout and personally talked to the Chancellor of IUPUI. They are working with IUPUI to make school safer for students. IUPUI plans to make the campus safer are still in development and administrators will release information as time goes on. Morales said that this’ll ensure protection and the well-being of minority college students.

Once there’s an opinion, there’s bound to be backlash. Morales said, “There were a lot of negative tweets, but there was a lot of people who didn’t show their faces. I think they were actually helping us to increase popularity via #SanctuaryCampus. They helped us a lot.”

Being a minority himself, a legal Mexican immigrant, he said felt he was the voice for minorities who felt like outcasts or unwelcome in a campus environment. He wants their voices to be heard and understood.

His parents, Maria and Hector Senior, support him, stating, “We are very proud of our boy. He will soon do many great things for our world. We just know it!” His siblings also agree. Emily said, “He’s really brave. To stand up and say something like that takes courage.”

In the end, Morales had only this to say: “The Caucasian community or any person that voted for Trump, we respect. At the end of the day everyone that was involved was aware that they respected the election. That’s what democracy is and looks like. We respect the fact that he’s our President. What we don’t respect is the hate speech of his campaign.”