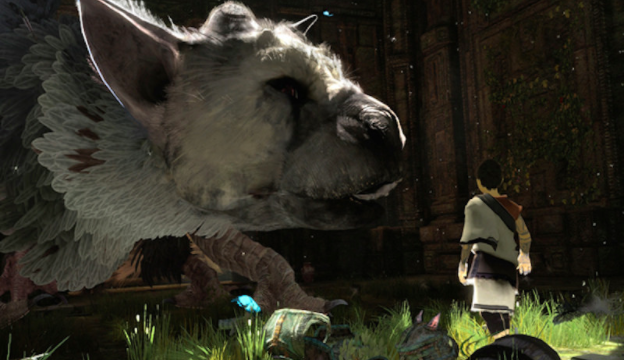 Team Ico, developers of Shadow of the Colossus and Ico, released their new game, The Last Guardian, which was in development since the Electronics Entertainment Expo in 2009 on December 6, 2016. This month, The Last Guardian’s price permanently dropped from $60 to $40 after mediocre sales. That is very sad to hear because The Last Guardian is a game with great plot, graphics, and amazing character development but the price drop was desperately needed due to the large amount of technical issues that made the game a terribly flawed masterpiece.

The Last Guardian is an artsy game that tells the tale of a young boy waking up next to Trico, a half bird half dog-like creature. Throughout the 10-15 hour game, they take an unforgettable adventure through a large, mysterious land. The boy and Trico’s bond strengthens through every step of the game, whether it is feeding Trico or Trico saving you, the player from a high fall, every interaction between the boy and his protector seems meaningful. Then there are times when you hate Trico because he won’t do what he is supposed to!

The Last Guardian is by no means a polished game. Sure, the graphics are beautiful but the technical difficulties with Trico makes this game a chore to play at times. One example of this is when Trico was supposed to put his tail through a hole so the protagonist could climb it up to get to the correct floor, but Trico just blatantly refused to do so for fifteen minutes. I shouldn’t have to wait 15 minutes for a game to realize what I’m supposed to do.

This isn’t the only example; I could list at least five more times where Trico’s Artificial Intelligence malfunctioned and stopped me from progressing through the story in a timely manner. When Trico does work correctly, it creates a cool, emotional scene that will make you love the game once again before coming to another instance of programming going horribly wrong. The Last Guardian is a difficult game, not because of its simple puzzles or the enemies, but because it tests your patience constantly. Team Ico is working on these problems, so after they fix every technical bug found within the game, almost every complaint I would have would vanish and this game would be one of my favorite games ever made. These technical difficulties is what stopped The Last Guardian from reaching the heights of Shadow of the Colossus, Team ICO’s previous game.

Now that I’m done critiquing the parts of the game that I dislike, I am ready to talk about what The Last Guardian does correctly, which is virtually everything but Trico’s AI. The story, most notably, is one of the most emotional bonding game I have played since The Last Of Us released in 2013. Every level strengthens the bond between you and Trico; you go through a story of happiness, pain, and protection together. You face waves of enemies and help each other heal after life-threatening events. The game also has flashbacks during major events of the story that allow you to know the backstory of the child and his Guardian, which makes both protagonists very complex and lovable.

There are many descriptors that can be used to describe the journey that takes place during The Last Guardian, parts of the story can be tear-jerking, while others are spine-chilling and jaw-dropping. At times you lose all hope, and at other times you feel happy and confident. Sometimes you may be filled with anxiety or distress, while other times you feel calm. The Last Guardian is unique due to the way it messes with your emotions constantly during the course of the game rather than sticking to one specific tone which occurs frequently with AAA releases. For example, Dark Souls, From Software’s difficult action RPG, never drops the hopeless feeling and The Last of Us, Naughty Dog’s narrative driven emotional action-adventure game,  keeps the sad tone throughout most of the story, with only a couple instances of comic relief. The Last Guardian takes a different approach and makes you constantly change your thoughts and emotions which makes the story even more memorable.

The gameplay is also quite good when it works. The gameplay mainly focuses on the boy’s interaction with Trico; you ask him to do certain tasks like jumping large gaps or standing up so you can reach high places. The gameplay is very reminiscent of Shadow of the Colossus, because you can climb on Trico to traverse long distances when you demand him to jump. Climbing on Trico feels very similar to the way Wander, Shadow of the Colossus’s protagonist, would climb Colossi during the game. Its platforming and wall jumping also feel Uncharted-esque due to objects falling apart while you are climbing them, but it is a much calmer game than Uncharted.

The Last Guardian is a mess; a beautiful, poetic artsy masterpiece mess. There is no excuse for the flawed AI and mechanics, but the superb story and calm platforming, along with a few great and unique gameplay mechanics help. If you want to play a game where the bond between characters is more important than the gameplay, this game is for you. If you want a game with fast paced action on every level and gameplay that doesn’t feel somewhat aged and broken, then you should probably not get The Last Guardian. If you are interested in the game, the new price drop should be more than enough for you to make the purchase!