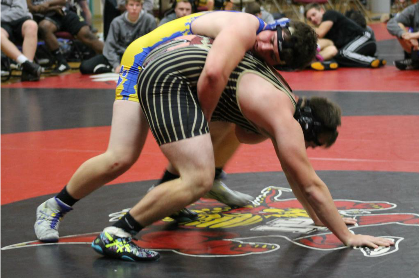 Photo: Aaron Young, 12, takes on his opponent at the New Palestine 6-Way Invitational.

GCHS’s wrestling team had a successful season, with a winning record of 18-8 and 3 state qualifiers.

Prosperity for individual team members or just the team itself is an achievement, but a combination of the two is quite the accomplishment. Not only did the GCHS wrestling team finish the season with a record of 18-8, but some wrestlers came away with incredible individual success.

Carter Noehre (11) was the Connersville Varsity Spartan Classic champion. Gavin Rose (10) and Lee Dullaghan (12) were both HHC Conference champions. Brad Lowe (11) and Noehre were both sectional and regional champions. Lowe, Noehre, and Rose each proceeded to state where Rose placed 7th in his weight class.

Taylor Gibson (11), wrestling manager, remembers some other special achievements; “We also had 9 of our 14 boys make it out of sectionals into regionals[, and of those,] 6 to semi-state.”

On top of their accomplishments, the GCHS wrestling team has much more to boast about.

“Teenage boys don’t usually show each other how much they love each other; they do, they just don’t always show it.  I am amazed at how much these guys show each other that they care,” said Josh Holden, head coach. The old saying goes ‘There is no ‘I’ in ‘team’’, and the GCHS wrestling team leads by example.

Coaches always say that finding a team that truly cares about the program and the sport more than themselves is a feat. Coach Holden has done just that, and he knows it.

“This year we have a team full of awesome guys who care about each other.  They care about doing the little things right.  And, they care about our program.  Teams like this are fun to coach,” Holden said.

The 2016-17 season has been one to remember for the GCHS wrestling team, full of unforgettable moments.

“It’s incredible that we took 3 kids to State [this season]. I went to state last year as a freshman by myself, but I didn’t have my brothers wrestling with me,” Rose said. “[It was] going to be different because [I was not] going to be alone.”

From the wrestlers to the coaches, it would be safe to say that everyone involved in the GCHS wrestling team is proud of what they achieved this season. “We have never had three State qualifiers who were underclassman before,” Holden said.

As for next season? With the three state qualifiers returning next season, Coach Holden says it best: “The future looks really bright.”