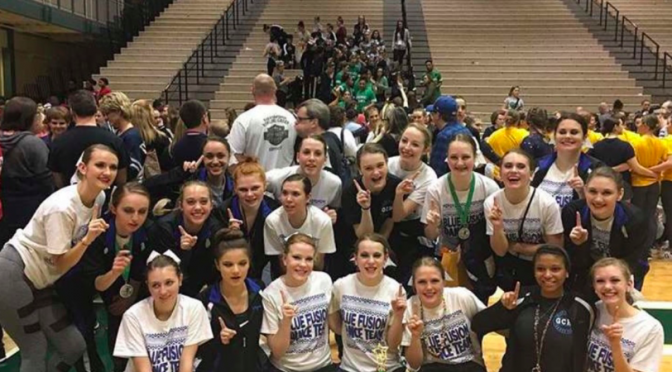 The GC Blue Fusion Dance Team has quite a list of accomplishments. In 2009 they finished first in the state in the now retired Production category. In 2014, Blue Fusion went to the state competition and earned second place in advanced varsity pom and fourth place in JV pom. Their latest big title is the IHSDTA 2016 2a Pom State Champions.

After having so many victories in the past two years, they have had a target on their back. “We’ve had to step up our game as far as skills and routine difficulty. We couldn’t enter the season with something like we did last year, because that’s what our competitors would expect,” said Coach Brittany Nigh.

Kaelie Kinder, 9, said, “We work really hard and we’re constantly making changes to our routines to keep them fresh and winning.” The team is currently trying to come back after ending their undefeated streak from December 2015 to January 2017.
“The rest of the season is just preparing for regionals and state. We have two full weeks to practice before this time. This is the most stressful time of the year, but also still the most fun time of the season for the girls,” said Coach Nigh.

Nigh continued, “The girls have been number 1, 2, or 3 at state every year since we’ve been a team here. That’s all they know.”
Dyanna Dorman, 11, said, “I think we have the potential to win at state. I think you’ll be hearing about our win there soon.” The team will be competing at the IHSAA state competition at New Castle on March 11.