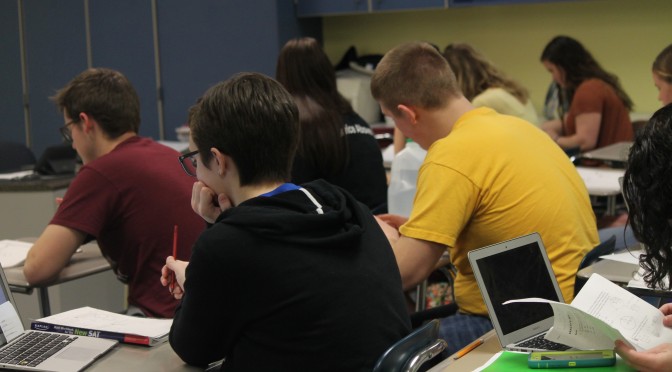 Sophomores in Indiana will have to take the ISTEP+ this year as a replacement of the ECA.

Some people support the change, but others say the test is more difficult than the ECA was last year. After gathering and comparing some opinions from not only teachers, but students as well, opinions are very mixed.

Aaron Smith, math teacher at GC, doesn’t see it as a stressful test, but rather that it is a test to show what students know. He tells his students to relax, and if they don’t know the answer, to just make an educated guess. Smith also said that if students pay attention in class and listen to their teachers, they will be fine during this test as it is just a review of what they learned before. Nothing new or unseen will show up.

“Looking at last year’s test, the ISTEP+ did seem more rigorous than the ECA. It covers a more broad range of question, it has both Algebra and Geometry whereas the ECA only had Algebra, and the questions go more in depth. Again, if students are listening to their teachers, and putting forth the effort to understand the concepts, they will be fine no matter what test they are taking,” Smith said.

Krysha Voelz, English teacher at GC, stated, “ISTEP+ differs from ECA in format, subjects tested, and in the nature of its questions. Therefore it may be perceived by some to be more difficult. However, both tests require students to read critically and write fluently. As long as students stay engaged, read actively, and write with supporting details, they should perform well.” Voelz also encourages her students to get a good night’s rest along with a proper breakfast. While taking the test, Voelz recommends that students “pace themselves, check their responses, and use all their allotted time on the test.”