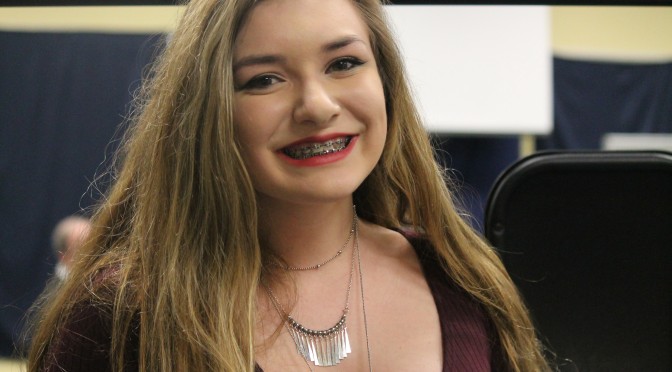 Photo Caption : Alli Horton, 9, performed a solo at the Solo and Ensemble contest.

On Feb. 4, G-CHS choir had their 2016-17 solo and ensemble competition. With the help of Mr. Grizzard, Mrs. Warner, and Mr. Hanson, 35 students that competed had a good time following with success.

“It was a huge success. G-CHS had the most entrants of all the schools in our district and all our students got Gold or Silver,” said Grizzard.

Many of the students said they had a special tie to the song they were practicing.

“This song was one I remember my great grandmother sang to me when I was little,” said Emily Royster, 9. She sang ‘All My Trials.’

“I liked my song because it was upbeat and about God,” said McBride. He sang ‘Ride on King Jesus.’

With such triumph, “It was a great experience and I would love to do it again,” said Grace Silicox, 9. She sang ‘Can’t Help Lovin Dat Man.’

Grizzard said there were a few obstacles to preparing for Solo and Ensemble, but the students took up the initiative to work through them. “It was difficult for me to find enough rehearsal time with each participant. Yet, the students were given recordings to practice with and they worked very hard on their own.”