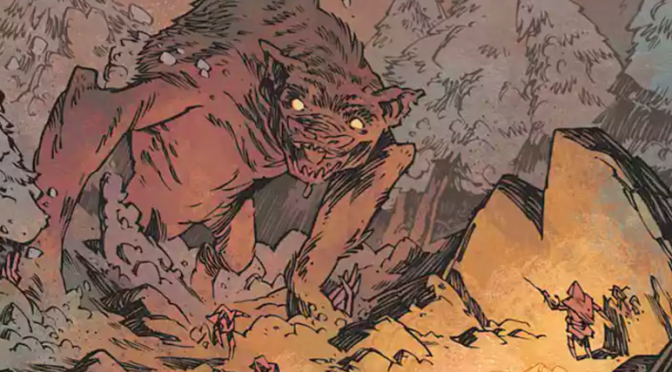 Image Comics new comic, Black Cloud, centered around a poor woman who has the power to transport people to their dreams, has finally released. Ivan Brandon, mostly known for writing Drifter and Viking, with the help of Matt Wilson, known for coloring the vibrant and fantastic comics The Wicked +The Divine and Phonogram, and Greg Hinkle, known for his art in Airboy, created a wonderful first issue for a series that has the potential to reach great heights in the long list of amazing Image comic series.

Black Cloud tells the story of Zelda, a teenage girl who makes money by transporting people to a world of their dreams after they contact and pay her. These dream worlds take a turn for the worse after a period of time, or when a character in the dream summon monsters. In this issue, Zelda takes Todd, a young man from her neighborhood that becomes her client, to his dream. The story itself seems very simple, but the lack of explanation on Zelda or the rules of these dream worlds both hurts and helps this issue. The story isn’t grounded; it purposefully leaves questions unanswered. The lack of explanation to the reader made the first encounter of the dream world a bizarre, imaginative, and amazing part of the issue. A world can’t be surprising and wild if you know everything about it, but knowing so little about it made me feel lost.

Then there is the fantastic art. The art is so surreal and the coloring is both dull and dark and vibrant and colorful throughout the issue. The issue starts on pages that are full of brown, gray, and black, but later on in the issue you see the amazing coloring Wilson is known for. The dream worlds are drawn in black and white while certain objects and people in the world are colored in which makes them stand out, and it has an incredible effect and it is one of my favorite aspects about the art.

The ending of the issue was one of the best parts, as it ends on a cliffhanger that made me extremely excited to read more. The only problem with it is that it felt somewhat rushed in the second half to lead up to this point. The second visit to Todd’s dream comes out of nowhere just to force the great last page, when this time could’ve been used as an explanation about some parts of the plot and a sneak peek of what’s to come through Zelda’s dialogue. I believe subtle hints about the last part of the issue and some exposition would’ve been much better than sprinting towards the cliffhanger, even if that cliffhanger is amazing.

Black Cloud starts the series off in a great, bizarre spot, but leaves many questions unanswered and has some pacing problems. I greatly recommend buying it now if you don’t mind a confusing, yet imaginative story. The one thing Black Cloud nails is having the same aesthetically pleasing coloring as comics such as The Wicked + The Divine, but with added effects such as the colors standing out from the black and white backgrounds. If you want to step into a world of creativity and want to see what it would be like to enter your dreams, then Black Cloud is perfect for you.