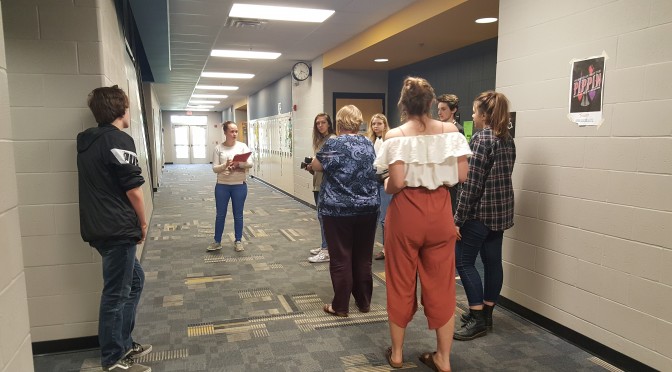 Among the many clubs at GCHS, a new one has risen, GEM (Gender Equality Movement). GEM is a club for both genders aimed to spread awareness and educate students on the issues facing gender equality.

Hailey Ayers, 11, is not only the founder of GEM, but also the designated club president. The inspiration for the creation of GEM came from several factors for Haley.

“The inspiration was a combination of research, personal experience, and general frustration,” says Ayers, “… I could talk about the inspiration for the club for hours …”

When Ayers enrolled Marnie Abram, 11, to assist in the development of GEM, the two of them agreed to discuss it with Mrs. Jill Slinker, English teacher at GCHS.

“GEM was actually created one day during winter break. Hailey and I had been thinking about starting a club like this for awhile, but we hadn’t really done anything because neither of us knew others wanted a club like GEM,” says Abram, recollecting on the process of forming GEM, “Then in January, we officially started working out the details about the club when we had a talk with Mrs. Slinker.”

With the creation of GEM came many questions about the purpose of the club and the direction it was going. Students may lack a true understanding of GEM, but Ayers and Abram are more than happy to clarify.

As for the purpose of GEM, Ayers says that issues or topics are held to a vote at one meeting, and at the next meeting, participants “compile information, [and] then discuss what causes the issue and ways to combat the issue in ourselves and the community.”

Ayers and Abram encourage both genders join GEM, though many believe the club is meant only for women.

“GEM stands for Gender Equality Movement, so it’s not just a female only club. We have three male officers,” says Abram, explaining what GEM truly represents, “We don’t have female only based discussions, the topics normally consist of issues that affect both genders …”

Ayers says, describing the roles of men and women in GEM, “Both genders can become involved in GEM by attending meetings, contributing to future fundraisers, or checking up on our website, and reading some of our featured articles. We pride ourselves on being an inclusive space. Anyone is more than welcome to join.”

Alex Carlson, 11, is a designated ‘boy whisperer’ for GEM. He says his job is to “encourage the male side to join despite the fact that it may seem like it is just for women, which it isn’t.”

Carlson says, “There is no fear in going because you are going to have a voice, even if you are not a female. We feel like there are a lot of issues that must be addressed by both sides. Just show up and share your opinions, as long as you won’t be negative to others.”
GEM is a  club at GCHS that is meant to educate and take action on topics pertaining to gender inequality. It is open to both genders, and is meant to be “a safe place,” as Carlson says.