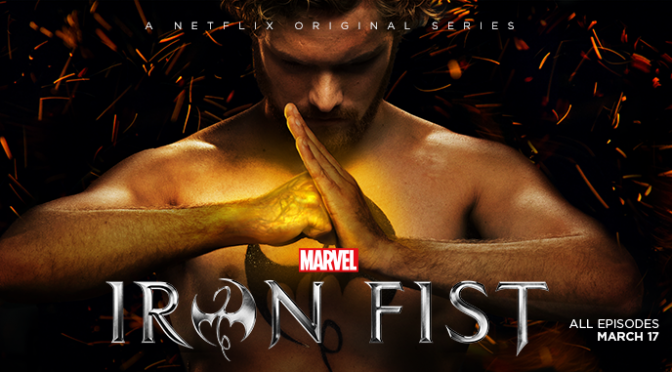 Marvel Netflix have done an extraordinary job in the eyes of critics and fans everywhere with their 3 series Daredevil, Jessica Jones, and Luke Cage. Besides complaints such as pacing, the trio of shows have been well received.

Netflix released Iron Fist back in March and it was instantly met with criticism and displeasure with the series. Whenever I got the chance to see the series for myself, I wondered how Marvel and Netflix could’ve made Iron Fist an atrocity in the eyes of critics.

After watching all 13 episodes of Iron Fist I could understand why the media has been hating on the series.

I agree with people all over social media complaining about Iron Fist’s slow pacing. The action scenes were there, but they weren’t as remarkable or plentiful as Daredevil’s iconic hallway fight scenes.

This will contain spoilers for the first season of Iron Fist. Honestly, there’s not many spoilers worthy of being plot twists or remarkable. Iron Fist barely delivers much- if anything -to the Marvel Cinematic Universe- or MCU.

The show starts off with Danny Rand, billionaire son of the wealthy entrepreneur Wendell Rand, coming back home to New York to take back Rand Enterprises from his former friend who took over the company.

This show is just asking for it. Most of the scenes are just people in suits and ties talking about business. The arc with the Meachum’s taking over the family business was not very action oriented and quite frankly very boring. Not to say that the TV show should always have action, but considering it’s a Superhero Crime show I’d expect the show to have battles often.

The first 6 episodes consist of some very slow build-up to the big bad of the season- The Hand; an organization seen in Daredevil season 2. Not much happens other than Danny meeting Colleen Wing and later befriending her.

Colleen was one of the actors I respected on the show and her scenes were good, but they definitely had a lot of wasted potential.

Colleen and Danny later train and Danny hones his skills in using Chi, a magical energy force strong in those who use Kunlun, to heal others and using the Iron Fist to burst open a couple faces and a few doors. For an overpowered “Street-Level Marvel Hero,” he certainly seems vulnerable.

After binge watching the show, I felt it harder and harder to watch it. I would’ve liked it if the show had been 8 episodes rather than 13.

The Meachum plot was too stretched out and I could see the twist of Ward’s father being the antagonist and betraying Danny from a mile away. The show takes an interesting concept, but the execution is bland and boring to watch in one sitting.

The parts I really enjoyed were the parts where the Hand was a threat. The battle with the 3 warriors was fun to watch, but not much to go off of.

I really expected more fleshed out characters, a more interesting Danny Rand, and a more mystic atmosphere from the MCU.

Also, it should be noted that the past 3 good Marvel shows and Iron Fist will team up in the upcoming series Defenders in August 18, 2017.

Instead of Defenders being 8 episodes and Iron Fist being 13, it should’ve been the other way around. Iron Fist just didn’t have much material to go by. They can’t show too much of the Hand and Iron Fist in the comics isn’t that appealing either.

In the end, I don’t recommend watching Iron Fist, but the last 3 Marvel shows did a fantastic job at capturing those characters.