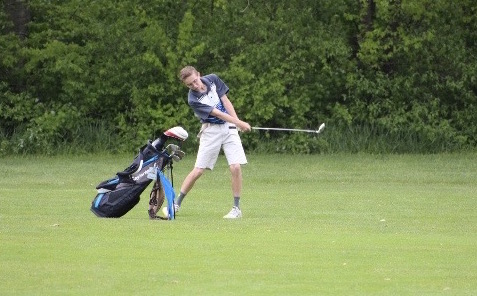 Photo: Noah Mohler, 10. Mohler is one of the top scorers for the Varsity team.

Coach Jeremy Spencer, said that there is very little pre-season conditioning as students are involved in other sports and most players go to camps or take lessons in the off-season.

“I prepare my team by helping them plan out a strategy for their upcoming match and work on the fundamentals that they need to improve upon individually and as a team.”

Spencer believes that it is his responsibility as coach to help his players become better sportsmen, act with integrity, and build individual player confidence.

“Golf is a complex sport and players develop at different rates. My job is to take them where they are at, educate them on the game and build a strong foundational skill set to be competitive for each match,” Spencer stated.

Varsity player Noah Mohler, 10, stated, “Our team is surprisingly amazing. I think it’s that underclassman bond we all have in us. Our team is super young, considering all of our players are sophomores and freshman, with one junior, Garrett Bice. Everyone treats each other with respect and our team is full of laughter, all the time. If someone is struggling, we all come together and help one another whether it be a mental issue or a swing issue. I couldn’t ask for a better team.”

Spencer also added, “The team has a very positive outlook on things and spend a lot of time outside of school practicing and playing golf in and out of the season. They are a great group of young men with great attitudes.”

Kyle Arrowood, 10, stated that his favorite part about playing golf is the excitement of playing new courses. He also says that during the off-season in the summer, goes out and plays at least 9 holes as the weather allows it. In the winter, Arrowood proceeds by using golf simulators as well as lessons.

Like other teams, the boys golf team has many goals for this season, including making it to regionals. Arrowood has his own personal goal of breaking 40 at least once this season.

Mohler stated that a typical practice consisted of Coach Jeremy Spencer giving instructions on what to do that day, whether it be playing the course, practicing chipping, putting, or driving. Then the boys practice that skill. Mohler is often a top scorer for his team. Some recent scores of his have been 42 and 45.

Kyle Arowood has a personal goal of breaking 40 at least once this season, but the team as a whole has both a goal and a dream of making it to regionals.