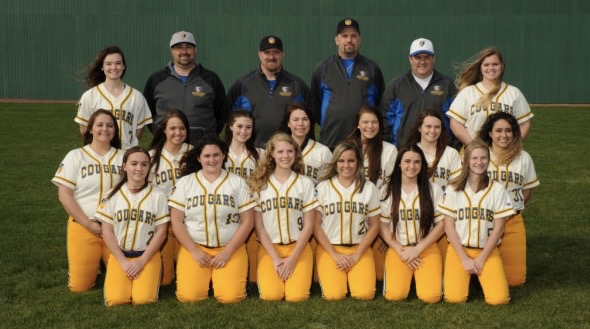 The GC softball team has had the same goal for the past few years: win twenty games, and win the Cougar Classic Tournament. Although they didn’t quite accomplish it last year with 17 wins, it is still a goal for this year. With a current record of 17-3, they’re not far from accomplishing these goals this time.

“This season has gone extremely well so far, and I think we could go a long way in sectionals this year,” said Morganne Denny, 12, “I believe we’re ready to win and dominate.”

Casey McDaniel, 12, said, “We had one of our best starts ever with a 16-1 start, and we just get better every game.” The team won the section title in 2015, and were in the championship game in 2016. McDaniel continued, “The seniors especially want to come back and win that title to redeem ourselves.”

The team has accomplished many things this season. “The highlight of my season was breaking the home run record. It felt amazing and just showed that hard work pays off,” said Denny.

Katelynn Condrey, 12, said “In my opinion, the highlight of our season was beating Noblesville.”

The seniors say they are sad to say goodbye to high school softball, but are so grateful for their experiences. Anna Evans, 12, said “The highlight of this season is knowing that this year is my last year playing high school ball and last time playing softball. My four years playing softball here at Greenfield have been so competitive and I’ve learned so much.”

Condrey said, “I hope all of us seniors have left a legacy of hope with the underclassmen that we are capable of accomplishing anything.”

The Lady Cougars will be in action in a playoff game this Monday May 22 at Muncie Central High School.